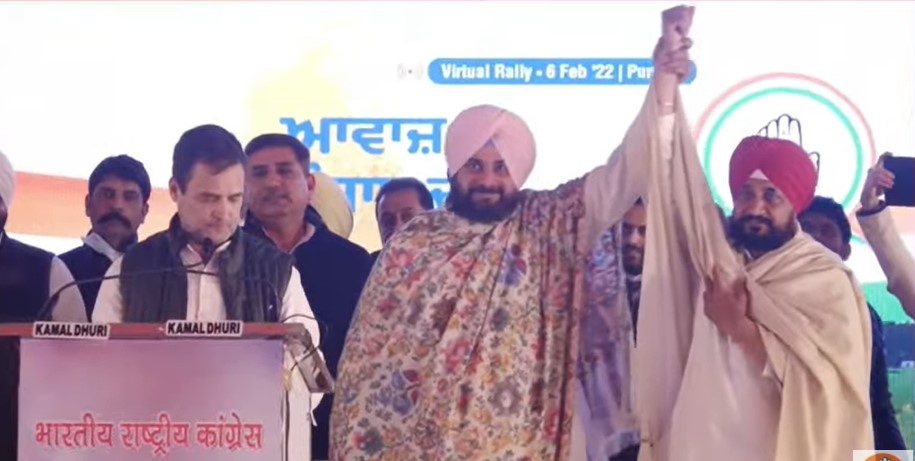 Speaking at the event, Punjab Congress chief Navjot Singh Sidhu showered praises on Rahul Gandhi and his visionary leadership as he repeated his party’s roadmap for Punjab after it was voted to power once again this year.

In a show of unity, the car that Gandhi travelled in was being driven by former Punjab Congress chief Sunil Jakhar while Sidhu and Channi remained seated behind.

Shri @sunilkjakhar Ji drove the car for Shri @RahulGandhi Ji while @sherryontopp & @CHARANJITCHANNI were seated in the back.

This is how the ‘United Congress’ will drive the Congress to victory in Punjab!#CongressHiAyegi pic.twitter.com/VvaH9JhKIp

While Sidhu was speaking, he urged Channi to clap. In response, Channi, who was seated next to Gandhi, rose from his chair and gave a tight hug to the cricketer-turned-politician.

Channi also thanked Gandhi for providing him with an opportunity to serve as Punjab’s chief minister for a little over 111 days.

He slammed Delhi Chief Minister Arvind Kejriwal by mocking his claims of being an aam aadmi. Channi said that Kejriwal stayed in a Rs. 50,000 hotel room and splashed Rs. 500 crore on advertisements.

Channi also took a dig at Kejriwal for projecting an ‘alcoholic’ Bhagwant Mann as the AAP’s CM face for the assembly polls.

Channi said that Sidhu his government will implement Sidhu’s vision after the Congress wins elections.