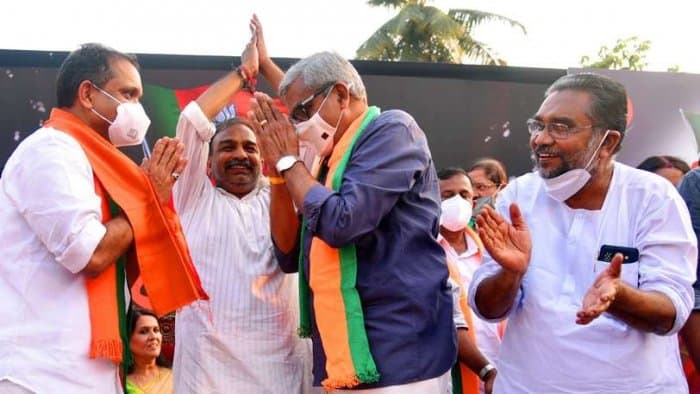 Justices (retd.) PN Ravindran and V Chitambaresh joined the BJP on Sunday just days before the southern Indian state is scheduled to go for crucial assembly polls. Justice Ravindran, according to the Bar and Bench website, had served as a judge of the Kerala High Court from 2007 to 2018, while Justice Chitambaresh was in the high court between 2011 and 2019.

The news of two retired judges joining the BJP triggered a huge debate with many arguing that there should be a cooling-off period for judges before they can enter active politics. Former diplomat KC Singh said, “Don’t know when they retired. There should be a mandatory 3 year cooling-off for judges of High/Supreme Court, military officers who were army commanders & above, all-india services officers who retire in top grades of their service.”

Similar sentiments were shared by netizens on social media as they demanded a minimum five years of cooling-off period for judges, who intended to try their luck in politics after demitting office.

Not too long ago, former Chief Justice of India Ranjan Gogoi had accepted a Rajya Sabha seat soon after his retirement. His judgments on the Rafale Scam and the title suit of Babri Masjid dispute had favoured the Narendra Modi government.

Earlier the Modi government had appointed the former Chief Justice of India Sathasivam as Kerala governor after he gave a clean chit to the BJP chief Amit Shah in a fake encounter case. In 2017, former CBI director, RK Raghavan, was appointed the new envoy to Cyprus by the Centre’s Narendra Modi government. Raghavan, who headed the SIT to probe Gujarat’s anti-Muslim genocide, had given Modi a clean-chit for his alleged role in the pogrom that killed more than 4,000 people.