Police in Madhya Pradesh have filed a case of murder against BJP leader Dinesh Kushwaha after he was seen mercilessly thrashing an elderly man in a viral video on suspicion of being a Muslim. The 65-year-old man, identified as Bhanwarlal Jain, later died. 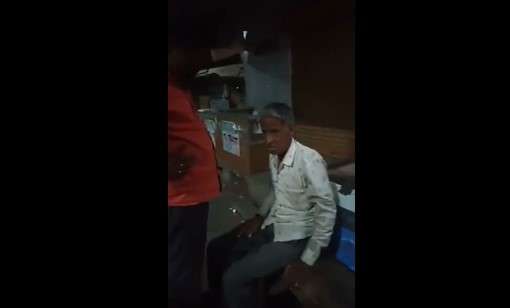 In the viral video, Kushwaha was seen asking, “Is your name Muhammad?” But even before the elderly man could reply, Kushwaha launched a brutal attack on him.

“Tell your name. Is your name Muhamamd? Tell me your correct name. Show me your Aadhar card.” Kushwaha was seen uttering in the video as he slapped the victim on his face furiously.

Kushwaha’s aggression increased manifold as the victim was unable to produce his Aadhar card. Kushwaha is the husband of a BJP corporator.

Sharing the video, former Madhya Pradesh Chief Minister Digvijay Singh tweeted, “I have got information that a crime has been registered against Dinesh Kushwaha of BJP under section 302. Let’s see if he gets arrested or not.”

It seems the elderly man was unable to understand what was being told to him by his attacker. Jain had no idea that a hatemonger would kill him on suspicion of being a Muslim.

Madhya Pradesh Home Minister Narottam Mishra tweeted, “A case has been registered against the accused of #नीमच incident under sections 302 and 304 of the IPC and arrested.”

Jain, who hailed from the Ratlam district, had gone missing since 15 May after visiting a religious place in Rajasthan. A missing complaint was filed about him, prompting the cop to issue an alert with his photos. According to NDTV, Jain’s body was found on a roadside in the Neemuch district.