An EVM malfunctioning in Saharanpur during today’s Lok Sabha polls has caused a huge controversy after a images of votes being cast for the BSP was seen going in favour of the BJP emerged. 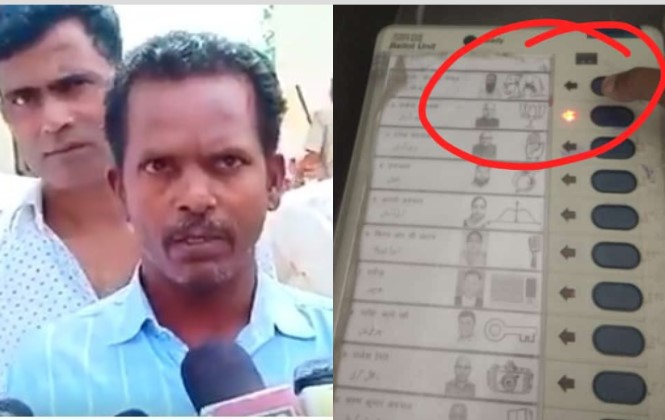 One Dhara Singh told reporters that when he reached the polling booth in Saharanpur to cast his vote, he was stunned to see his vote going in favour of the BJP. He told reporters, “I was pressing the elephant (BSP’s election symbol), but my vote was going to the BJP. The same happened with five other people. This prompted us to complain to the election officials present there.”

The video of Dhara speaking to reporters was shared by senior journalist Rajdeep Sardesai on Twitter.

This BSP voter in Bijnore claims that every time he pressed the elephant symbol, the lotus was blooming! We are verifying the claim.. #IndiaElects pic.twitter.com/5VL3uOCXsb

Rakesh Kumar, Bijnor Sector Magistrate, denied reports of EVM malfunctioning. He was quoted by news agency ANI, “No such incident has taken place. Elections are being held peacefully. There were some issues during mock polling so we changed the entire set.”

However, Dhara said that all he wanted was a free and fair elections. “I just want my vote being cast in favour of the party of my choice. Only then will I be satisfied.”

Earlier in the day, polling at booth number 158 in Saharanpur was halted due to faulty EVM. In 2014, the seat had registered a polling of over 75 percent. On Thursday, the Election Commission said that around 53 percent polling had been registered by 3 pm.