Hindutva terrorists, who issued chilling calls for Muslims’ ethnic cleansing in India, have approached the police to file a counter FIR as they asked the cop to support hatemongers. In a viral video, Hindutva terrorists’ call for support ends in a burst of laughter by all including the man in uniform. Meanwhile, the Uttarakhand Police have not yet arrested a single Hindutva terrorist, who called for the genocide of Muslims in Haridwar. 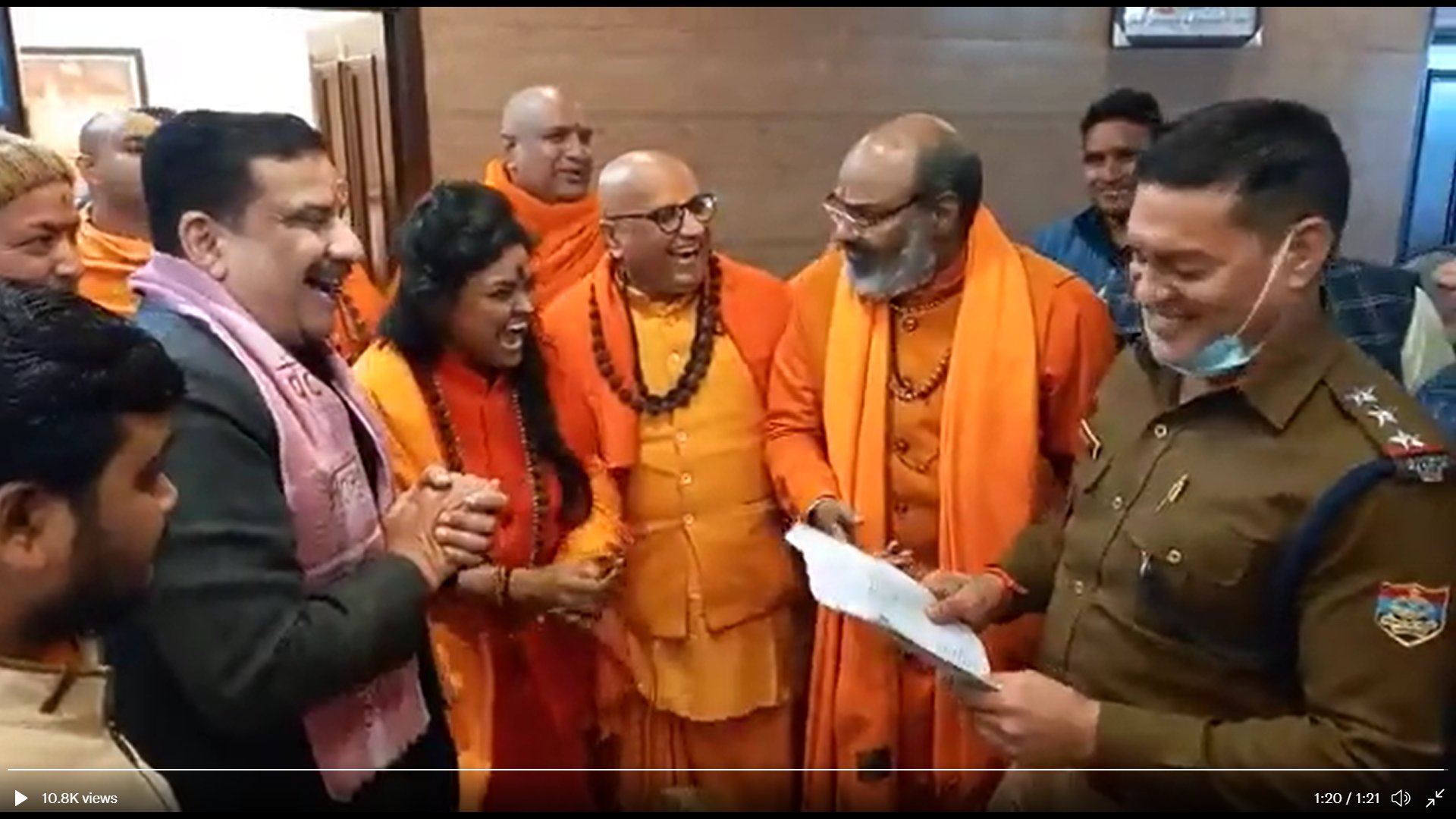 In the viral video, all Hindutva terrorists including those named in the police FIR can be seen presenting a copy of their complaint to a cop. Annapurna, who made a chilling appeal to kill 20 lakh Muslims in India, could be seen saying to the cop, “a message must be sent from your end that you (the police) are not biased. You are a constitutional officer and you are equal to everyone. We expect this from you and may you always be blessed.”

To which, another Hindutva terrorist, Yati Narsinghanand, said, “Why ask him to be neutral. He is one of us. It’s obvious that he will be on our side.”

Narsinghanand’s audacious comments evoked laughter from all including the cop.

These Hindutva terrorists had given a call for the arming of Hindutva to kill Indian Muslims. The Uttarakhand Police had decided to look the other way until the video of speeches made by Hindutva terrorists went viral. Uttarakhand DGP Ashok Kumar first said that one man, identified as Waseem Rizvi aka Jitendra Narayan Tyagi, had been booked in the case pertaining to the Haridwar meet.

Also Read: “Not 1940’s Nazi Germany. This is 2021 #HaridwarlGenocidalMeet in India”: British MP calls for intervention by global powers as Hindutva terrorists’ call for Muslims’ genocide

However, after facing widespread condemnation, Ashok Kumar said that two more Hindutva terrorists had been included as accused. They were Annapurna, also known as Pooja Shakun Pandey, and priest Dharamdas Maharaj.

In the latest video, both Annapurna and Dharmadas could be seen interacting with the cop without any fear of arrest or other police action.

As expected, the latest video has evoked angry reactions from netizens on social media.

At the end of this video, one “dharam guru” says, referring to the Police- “why would he be unbiased in discharge of his duties. Obviously he’ll be on our side”. Others laughed out loud.
A truthful depiction of the rot in our country’s justice delivery system. pic.twitter.com/LEaVEg8Eg6

Annapurna: Show us that you’re not biased.

Narsinghanand: He is biased and our side.

All (including the police officer) burst into laughter. The joke is this country and its rule of law. pic.twitter.com/kKMKUND8ym

The sheer brazenness of these Hindutva terrorists is chilling to say the least. Uttarakhand DGP has been appearing on different TV channels to assure pro-government anchors that his police would take necessary action. 76 top lawyers from the country recently wrote to Chief Justice of India NV Ramana explaining the gravity of the development and requesting his urgent intervention. But, far from taking any action against those Hindutva terrorists, who issued genocidal calls, the accused have chosen to mock the rule of law by approaching the police and asking them to support Hindutva hatemongers.