In a rare development, a scam-accused BJP MP from Madhya Pradesh, Guman Singh Damor, was found himself being chased by brave local reporters in Bhopal. Damor is facing allegations of Rs. 600 crore scam and was reportedly summoned by Madhya Pradesh BJP chief VD Sharma to the party’s state HQ in Bhopal. 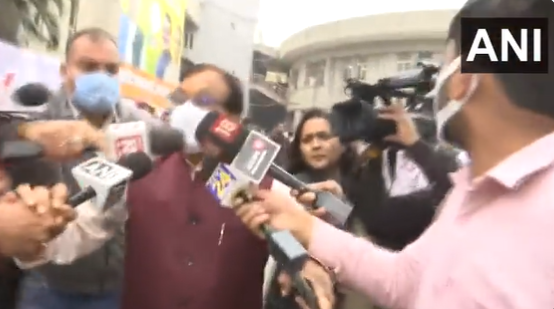 Once out of the building, the BJP parliamentarian from Ratlam was mobbed by local reporters, who began to give him grief without worrying about consequences. One reporter asked, “Sir, you have to reply to our questions.”

Another asked, “Sir, you’ve committed a fraud of Rs. 600 crore. Why are you pushing us?” “You committed this scam,” said another reporter.

Damor said, “This (the allegation) is wrong.” One reporter responded, “But the court has said this. Will you take a decision based on moral grounds?” “Will you resign on morasl grounds,” asked another.

Damor decided to stay quiet as he kept running away from the scene prompting one reporter to even remark, ” For how long will you keep running away. You have to answer.”

A local court has issued a notice against Damor and several other government officers in connection with the reported scam. This was after a journalist, identified as Dharmendra Shukla, filed a complaint before the court and submitted evidence in relation to the scam.

While posted as the Fluorosis Control Project executive engineer, Damor along with other accused had allegedly cleared bills worth over Rs 600 crore for those who bought fluorosis control and pipe supply material.

Damor has denied all allegations against him.

62-year-old Damor was elected to the Indian parliament as a BJP MP from Ratlam Lok Sabha constituency in the 2019 elections.