Janta Ka Reporter 2.0
Home India “He was a man with a magical eye”: Chief Justice of India...

Chief Justice of India NV Ramana on Wednesday paid rich tribute to Pulitzer Award-winning photojournalist, Late Danish Siddiqui, saying that he was a man ‘with a magical eye.’ 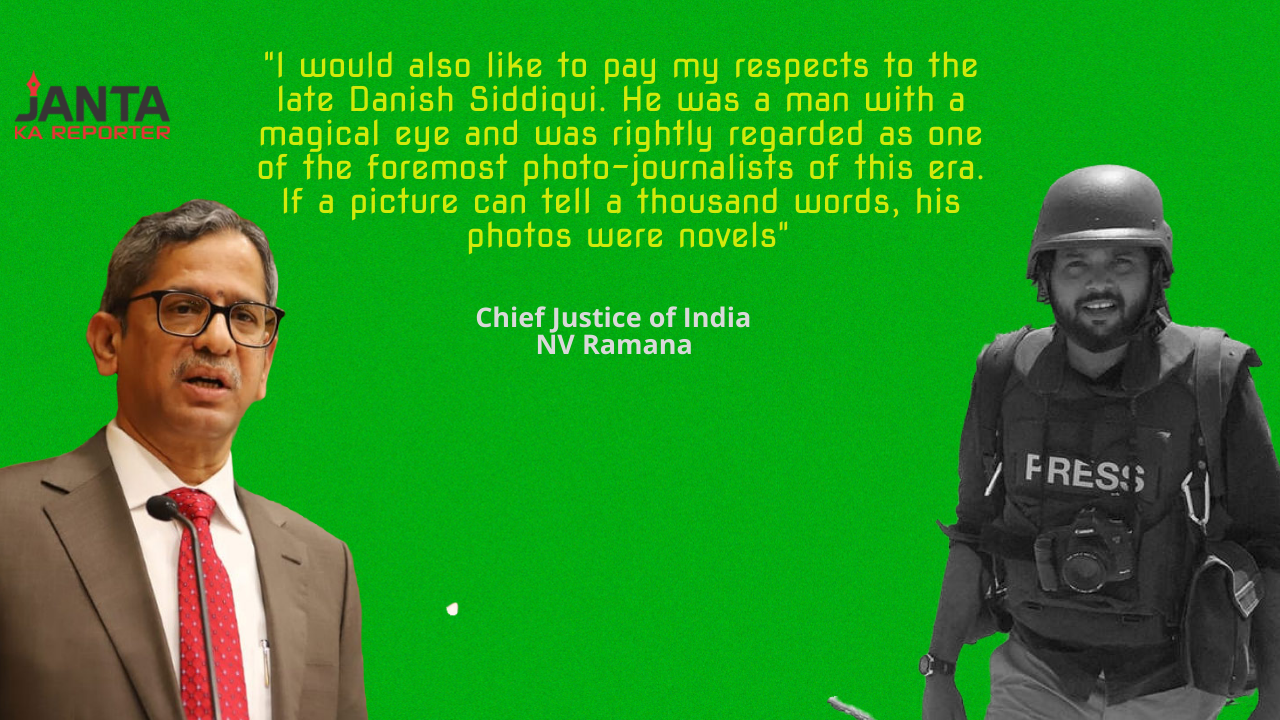 Speaking at a awards ceremony organised by the Mumbai Press Club, CJI Ramana said, “I would also like to pay my respects to the late Danish Siddiqui. He was a man with a magical eye and was rightly regarded as one of the foremost photo-journalists of this era. If a picture can tell a thousand words, his photos were novels.”

CJI: I would also like to pay my respects to the late Danish Siddiqui. He was a man with a magical eye and was rightly regarded as one of the foremost photo-journalists of this era. If a picture can tell a thousand words, his photos were novels.

Siddiqui, who was killed by the Taliban just before they took control of power in Afghanistan in August, was named Journalist Of The Year by the Mumbai Press Club during the Red Ink Awards ceremony.

The US State Department had issued a profound tribute to Danish, who worked for the Reuters news agency, after his death while covering the fighting in Afghanistan. The reaction from the US had come amidst mounting criticism for Prime Minister Narendra Modi and his External Affairs Minister S Jaishankar for their silence on the death of a globally renowned Indian journalist.

Speaking to reporters, US State Department’s Principal Deputy Spokesperson Jalina Porter said, “We are deeply saddened to hear that Reuters photojournalist Danish Siddiqui was killed while covering fighting in Afghanistan. Mr. Siddiqui was celebrated for his work on some of the world’s most urgent and challenging news stories and for creating striking images that conveyed a wealth of emotion and the face – and the human face behind the headlines.”

Former Afghan President Ashraf Ghani had phoned Danish’s father to express his condolences on the latter’s tragic death. A statement from Ghani’s office had read, “This afternoon, H.E President @ashrafghani called Professor Sediqi, father of @Reuters journalist late Danish Sediqi & conveyed his condolences over the death of his son to his family, friends & colleagues. Th Pres termed his death as a great loss for the journalism fraternity. (sic).”

Danish was responsible for bringing global attention to the second wave of the pandemic gripping India through his powerful photographs and videos. He had also exposed the government’s inept handling of the human tragedy that caused hundreds of thousands of people to die due to lack of access to basic healthcare and oxygen.

The 38-year-old globally-renowned photojournalist had won the Pulitzer award for his photographs on Rohingya immigrants arriving at the shores of Bangladesh.