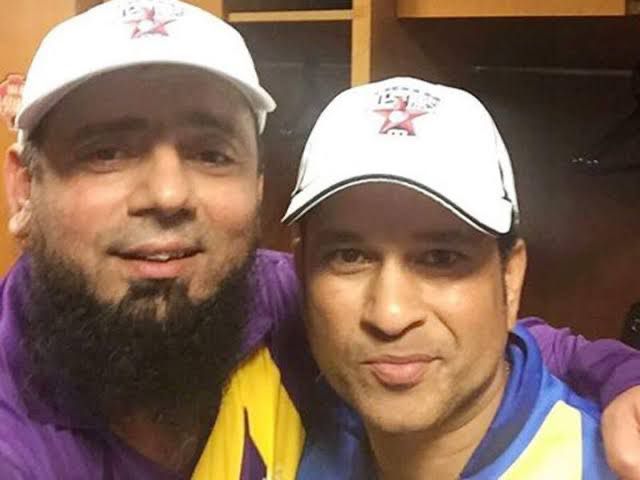 Sharing a photo of himself with Mushtaq, the Indian batting legend wrote, “Many happy returns of the day @Saqlain_Mushtaq. Wishing you a long life full of good health and happiness. My best wishes to your family.”

Mushtaq thanked the former India cricketer and expressed his desire to meet him soon. “Paaji thank you so much for your prayers, blessings and good wishes. It’s been too long, hope to see you soon @sachin_rt.”

Paaji thank you so much for your prayers, blessings and good wishes. It’s been too long, hope to see you soon @sachin_rt ????

Tendulkar’s post left many cricket fans nostalgic as they recalled how Mushtaq was responsible for dimissing Tendulkar in the India-Pakistan Chennai Test in 1999. User Rahul Fernandes wrote, “This picture of you together brings back memories of one of the greatest India-Pakistan moments: When Saqlain dismissed him in that Chennai Test of ’99, it led to a collapse and heartbreak, and famously got Sachin so teary, he didn’t come to collect his Man of the Match award.”

User WHD commented, “and then Chennai crowed won hearts of cricket fans of Pakistan forever by giving a standing ovation to the Pakistan team on winning a close fought match. alas! those good times have changed drastically now, let’s hope such good times will come back soon.”

Pakistan had won the Chennai Test by 12 runs. Tendulkar was out for a duck in the first innings before he hit an impressive century in the second innings. However, it was Saqlain Mushtaq, who dismissed the former Indian batting maestro in both the innings, causing heartache for Indian fans. Tendulkar was declared Man Of The Match even though India suffered a defeat in the Chennai Test.

Elsewhere, Tendulkar’s birthday greetings for Mushtaq did not go down well with Hindutva fanatics. One user wrote, “it is nice to see your love for Mushtaq. Perhaps you should see his videos on what he talks about Hindus and Indians. India has given you all the love and stardom. This is not about religion. But someone’s hate for India TBH.” Another commented, “Yeh kya Sachin ji,, Pakistani ko wish kyon kar rahe hain?”

Saqlain was responsible for inventing the ‘doosra’ delivery in cricket. He picked up 208 wickets in Tests and 288 in the One Day Internationals.