Congress leader Priyanka Gandhi Vadra has sensationally alleged that the Hathras District Magistrate has threatened the gang-rape victim’s family a day after her body was forcibly cremated. Priyanka shared a video on Twitter to substantiate her allegations. 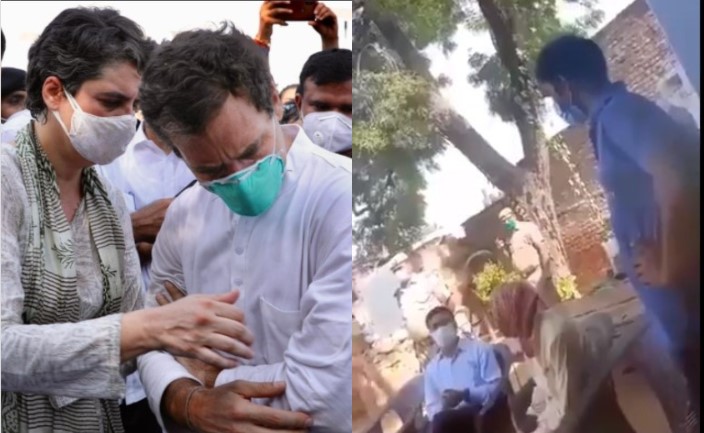 In the video shared by Priyanka, a man (whom Priyanka claims to be the Hathras DM) can be seen explaining to an elderly person, believed to be the victim’s father, why he needed to trust the government more than the media. He’s heard saying, “You don’t lose your trustworthiness. What can I say about these media persons. Today they came here, tomorrow they will go somewhere else. We will continue to stand with you. It’s your wish whether you want to keep changing your statements.”

Both Priyanka and her brother Rahul Gandhi were briefly detained by the UP Police on Thursday as they attempted to visit the victim’s village. Rahul Gandhi was seen falling to the ground during a scuffle with police. The Congress tweeted, “Shri Rahul Gandhi, Smt Priyanka Gandhi and senior Congress leaders have been arrested by the UP police.”

The UP Police, for its part, said that both Rahul, Priyanka and 150 congress supporters were charged for violation of prohibitory orders issued under CrPC section 144.

A news report by the PTI said that they were also charged with violation of the orders related to the Epidemic Diseases Act, imposed in view of the COVID-19 outbreak, and booked under IPC section 188 (disobedience to order duly promulgated by a public servant), a senior Gautam Buddh Nagar police officer said.

Meanwhile, the Allahabad High Court has taken cognisance of the Hathras gang-rape incident and of the forcible cremation of the Dalit girl when her body was brought from Delhi’s Safdarjung Hospital last month. The High Court Bench comprising Justices Rajan Roy and Jaspreet Singh said, “The incidents which took place after the death of the victim on 29.09.2020 leading up to her cremation, as alleged, have shocked our conscience, therefore, we are taking suo moto cognizance of the same.”