Facebook has come under widespread criticism for censoring posts critical of Prime Minister Narendra Modi for his handling of the latest pandemic after it became evident that the social media giant had blocked posts shared under hashtag #ResignModi on its platform. Faced with global outrage, Facebook later said that it had revoked the ban on the hashtag and posts had been restored. 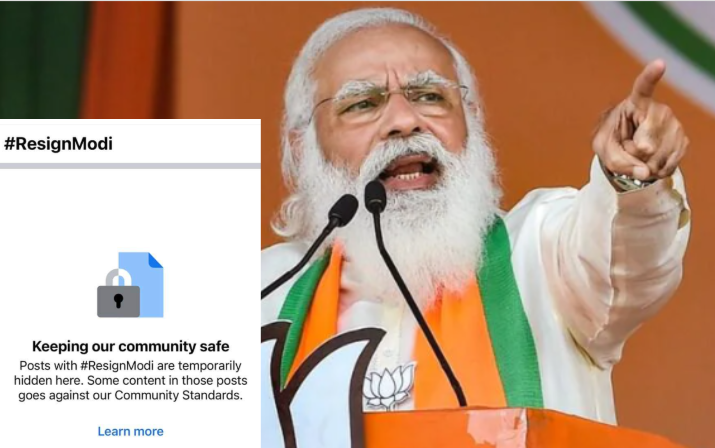 The message by Facebook continued, “Posts with #ResignModi are temporarily hidden here. Some content in those posts are against our Community Standards.”

FB India is currently censoring posts calling for the resignation of the Prime Minister https://t.co/1PZjB5Q3Nm

We will update as we learn more.https://t.co/DjACbwfruG

Today Facebook has censored all posts with the hashtag #ResignModi! Search for it, and it’s all censored.

Anyone think this would happen in a democracy? pic.twitter.com/eceWK5Sz1k

Left red-faced, Facebook soon announced that it had restored all posts shared under hashtag #ResignModi. Facebook spokesperson Andy Stone tweeted, “This hashtag has been restored and we are looking into what happened.”

This hashtag has been restored and we are looking into what happened.

Angry Indians have taken to social media to express their anger against the Narendra Modi government as the second wave of the pandemic wreaked havoc across the country. Soon hashtag #ResignModi began to trend as reports of tens of thousands of death emerged with an alarming frequency. The Indian government was later found to have forced Twitter to remove certain posts critical of the government’s handling of the pandemic. Many felt that Facebook too had censored the hashtag #ResignModi to please the BJP government.

Facebook has been found to favour the BJP in the past when an American publication exposed the social media giant’s former India policy head Ankhi Das’ Islamophobia. Das had later resigned from her post.