The Election Commission will send notice to at least two newspapers that ran full page advertisements for Vivek Oberoi-starrer film on Prime Minister Narendra Modi. The EC has taken a dim view of the code violation by the two Hindi newspapers.

Two newspapers that carried the full page ads are Dainik Bhaskar and Dainik Jagran. While Bhaskar has given full page space to the advertisement on the film, Jagran too has carried a full page ad, but not on the front page. The full page ad for Narendra Modi’s film in Jagran has appeared in its supplementary page for Noida.

A source in the EC told Janta Ka Reporter, “While we will take a call on whether the film should be allowed to release next month when the Model Code of Conduct is in force, we’ve decided to send notices to the two newspapers, who carried the ad on Narendra Modi film, for the code violation.”

The ads in both the newspapers has the poster of the film that was released on Tuesday. 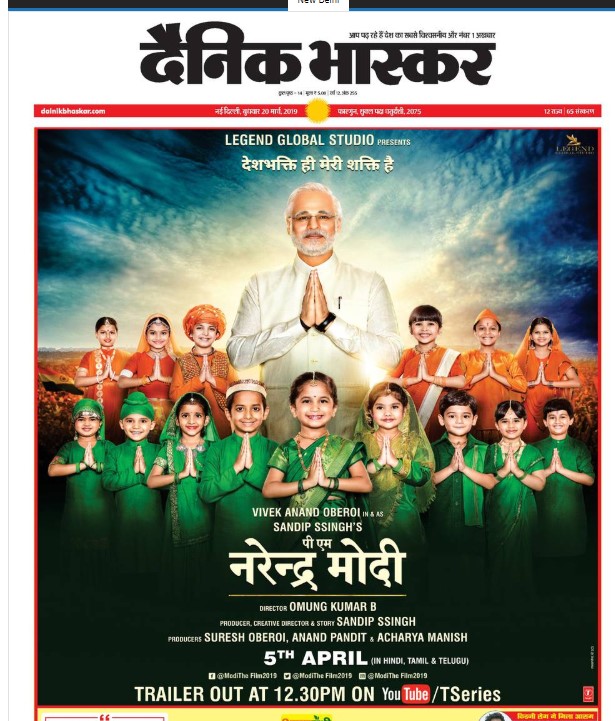 Directed by Omung Kumar, the film is set to release on 5 April. Among the film’s producers are Vivek’s father Suresh Oberoi, Anand Pandit and Acharya Manish. Many have already raised suspicion on the timing of the film’s release since the first pahse of the Lok Sabh polls is scheduled to take place on 12 April.

The Election Commission this year has adopted a tough stand in dealing with incidents of code violation. Earlier this month, the poll body had forced BJP MLA OP Sharma to delete his Facebook post featuring Wing Commander Abhinandan, who was captured by the Pakistani army, before it released him two days later. Sharma’s decision to post his photo was deemed as an attempt to woo voters playing the nationalism card.