The Tamil Nadu unit of the BJP on Tuesday deleted a tweet of a gift receipt meant for former Jammu and Kashmir Chief Minister Omar Abdullah after considerable outrage on the internet. 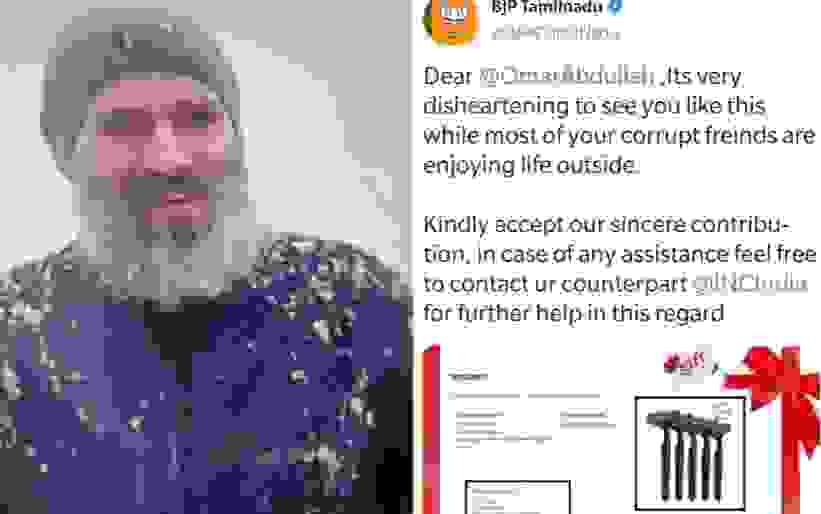 The Tamil Nadu unit of the BJP had posted a gift receipt as evidence that it had sent a set of razors for Abdullah to shave his beard that had grown long during his months of arbitrary detention by the Indian authorities. It wrote sarcastically, “Dear @OmarAbdullah, it’s very disheartening to see you like this while most of your corrupt friends are enjoying life outside. Kindly accept our sincere contribution, in case of any assistance feel free to contact your counterpart @INCIndia for further help in this regard.”

If New President of the BJP, who hails from our neighbouring state Himachal Pradesh, Right Hon’ble MP @JPNadda has even an iota of sensitivity and propriety-which I am sure he does, then he should sack the authors of this thoroughly distasteful Tweet. @BJP4India @BJP4TamilNadu https://t.co/vF9ZE8hlVT

How insensitive & hateful can someone be!!! Appalled that this is the level of discourse the biggest national political party of our country is propagating! Shameful, to say the least! #Kashmir https://t.co/vtY1eY17ES

Last week, Twitterati were left in a state of shock after a rare photo of Omar Abdullah from his detention centre made way to social media. While West Bengal Chief Minister Mamata Banerjee said that she could not recognise Omar, others said that the photo told the story of India’s ‘inhuman’ policy on Kashmir.