Comedian Kunal Kamra posted a video of Republic TV founder Arnab Goswami being ambushed by him in mid-air on board an IndiGo flight. In the video, Kunal could be seen challenging Goswami for a debate over a programme he broadcast questioning the caste of Dalit research scholar Rohit Vemula in 2016 at Hyderabad University. 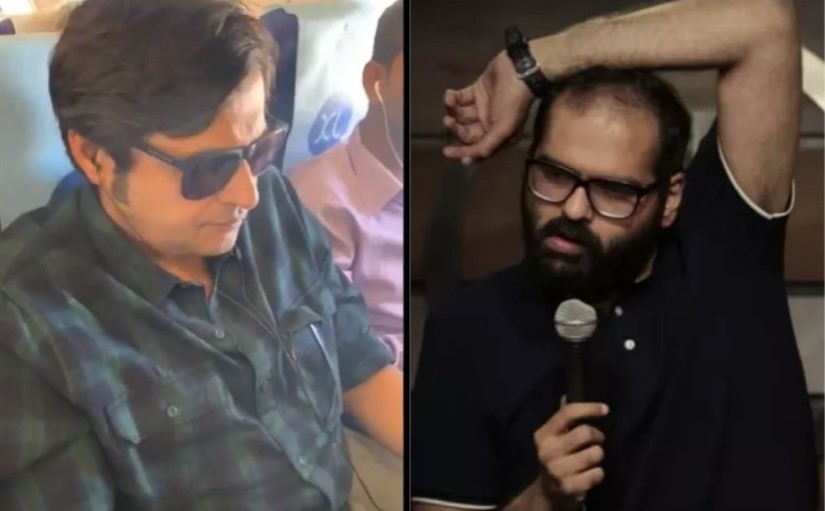 The video posted by Kunal showed him engaged in a one-way conversation with Goswami, “Here I’m asking coward Arnab Goswami about his journalism and he is doing exactly what I expected him to do. He’s being a coward. First, he called me mentally unstable. And now he’s saying he’s watching something.

“He’s not ready to answer my questions viewers. Viewers today want to know if Arnab is a coward or a nationalist. Arnab, this is for the national interest. I’m part of the tukde tukde narrative. You should deflate me. You should take the enemy of the state down. You should make sure that the country is in safe hands of Narendra Modi.”

Kunal continued, “You should fight against dynasts like Rahul Gandhi who I support on 10, Tughlak Lane. Arnab, you should have a reply Arnab. Arnab, are you a coward or are you a journalist or a nationalist? Who are you Arnab? Tell me, I’m waiting for your answer. As I expected, your cowardice has got the better of you. I wanted to have a conversation with you politely but you don’t deserve my politeness.

“This is not for you but this is for Rohit Vemula’s mother whose caste you were discussing on your f**king show. I know it’s not allowed. I will go to jail for this. This is for Rohit’s mother. Go and f**king find time and read the 10-page suicide letter that Rohit wrote so that you have some emotions or some heart or you become humane. Do that in your free time, you nationalist.”

Speaking to Janta Ka Reporter, Kunal explained how he ambushed the controversial anchor. According to the popular comedian, he first approached Goswami for a conversation before the flight took off but he declined the request asking for politeness. Kunal returned to his seat only to return to Goswami on the pretext of using the washroom after the flight was airborne.

This is where he recorded his conversation. Kunal said that Goswami pretended to work on his laptop after seeing him near him.

Kunal also added that Rohit’s suicide letter still sent shivers down his spine adding that he had no regrets about ambushing Goswami.