Police in Bihar have arrested a youth, who assaulted Chief Minister Nitish Kumar during a public event in Bakhtiarpur. 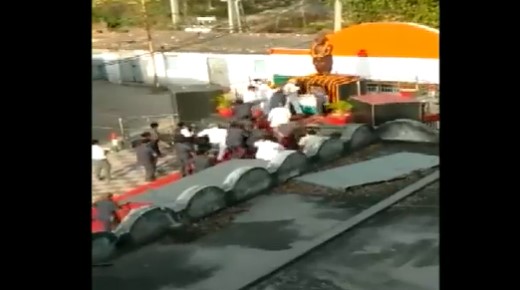 The video of the chief minister being attacked has gone viral on social media, evoking strong reactions from netizens.

In the video, a youth could be seen rushing to the place where Kumar had reached to pay his tribute to the statue of freedom fighter Shilbhadra Yaji.

Bihar | A youth tried to attack CM Nitish Kumar during a program in Bakhtiarpur. The accused was later detained by the Police.

Kumar’s attacker has been identified as Shankar Sah, who hails from the chief minister’s native place in Bakhtiarpur. The youth reportedly runs his own jewellery shop. The motive of the attack is not yet known but the police have reportedly begun interrogating him.

Last year, stones and onions were hurled at Nitish Kumar during an election rally in the Madhubani district. The attacker in question was heard shouting that the government headed by Kumar had failed to stop the smuggling of alcohol into the state.