Days after Twitter users in India took a dim view of a pro-Kashmir social media post by Hyundai Pakistan, Indian netizens have now begun targeting two American outlets namely KFC and Pizza Hut for the same reason. This was after it emerged that both official Twitter handles of KFC and Pizza Hut Pakistan had showed solidarity for the people of Kashmir in India. 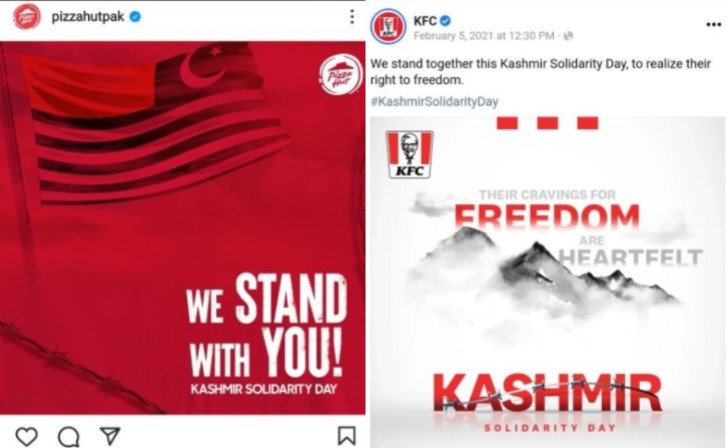 A Facebook post by KFC Pakistan had allegedly said, “We stand together this Kashmir Solidarity Day, to realize their right to freedom.”

An Instagram post by Pizza Hut Pakistan had read, “This Kasmir Solidarity Day, let’s join hands and stand united for the freedom of our Kashmiri brothers and sisters.” The caption on the photo used read, “We stand with you. Kashmir Solidarity Day.”

As expected, Indian users began to fervently share the controversial social media posts by Pizza Hut and KFC, both belonging to US company, Yum.

Eat Indian as well. Do not give your hard earned health and money to non-Indian companies.#BoycottKFC #BoycottPizzaHut https://t.co/DkplqtoJ4s

After Hyundai, now it’s time to #BoycottPizzaHut@PizzaHutIN you don’t deserve any business in India.
Pack your bags and move to Pakiztan asap!!

Fearing reprisals, KFC issued a profuse apology as the company pledged its support to India. The statement shared on Twitter read, “We deeply apologize for a post that was published on some KFC social media channels outside the country. We honour and respect India, and remain steadfast in our commitment to serving all Indians with pride.”

In a similar statement, Pizza Hut India said that it did not  ‘condone, support or agree with the contents of a post circulating in social media.’