Suresh Chavhanke, the rape-accused editor of India’s hate platform, Sudharshan TV, was left stunned on Sunday after he made a desperate attempt to push Islamophobia by accusing Shah Rukh Khan of spitting at the mortal remains of Lat Mangeshkar. Also putting Chavhanke in his place was actor Mukesh Khanna, who chided the Sudarshan TV owner for spreading hate. The controversial TV anchor was also reprimanded by actor Mukesh Khanna on LIVE TV. 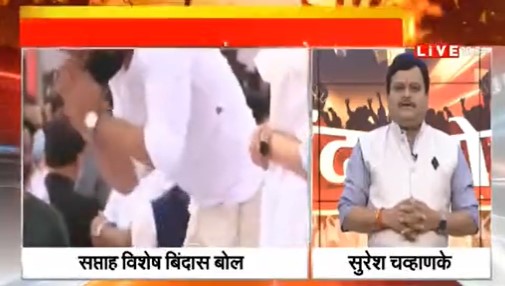 Chavhanke had decided to do a LIVE show by inviting callers to express their opinion on the viral of Shah Rukh paying his tributes to Lata Mangeshkar. Expecting that Mukesh Khanna would endorse his views in pushing Islamophobia, Chavhanke asked, “What has Shah Rukh Khan done. Has he spat at Lata didi or blown air? This is a very serious allegation.”

Khanna said that he did not believe that Shah Rukh would ever indulge in such a despicable act. “Whatever Shah Rukh Khan did, he did very well according to his own ways. I cannot accept that he would have any bad intention, that too for Lata ji, who he respected a lot and even visited her house… What kind of issue are you making?”

Disappointed by Khanna’s remarks, Chavhanke thanked his guest and disconnected his line.

One of his callers was a man, who said that Shah Rukh had merely recited some dua and blown air on Lata Mangeshkar’s mortal remains in accordance with his beliefs. The caller said, “All I want to say is that if any family members of Lata Mangeshkar are watching your programme right now, they must be spitting on your face.”

Stunned by the caller’s outbursts, Chavhanke blamed the caller’s upbringing before abruptly ending the phone-in show.