Gujarat MLA Jignesh Mevani on Monday launched a blistering attack on Prime Minister Narendra Modi with a ’56 inch of cowardice’ jibe in his first press conference since being released from police custody in Assam. 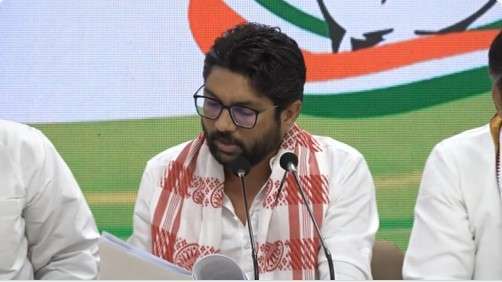 Speaking to reporters, Mevani said, “They (Assam Police) informed the Gujarat Assembly Speaker after I was taken to Assam. I believe the Assam Police have insulted the pride of Gujarat.”

The Assam Police had arrested Mevani from Gujarat last month for his tweets critical of Modi. He was taken to Assam where a local court granted him bail and lashed out at the police for filing false cases against the lawmaker.

Sessions Judge Barpeta A. Chakravarty had bail to Mevani but urged the Gauhati High Court to consider directing the Assam Police to bring about urgent reforms in its force.

Using strong words, the sessions court had said, “Otherwise, our State will become a Police State, which the society can ill afford.”

Mevani was granted bail but the Assam Police had immediately arrested him again alleging that the MLA from Gujarat assaulted a lady cop and used force to push her down inside a police van while being taken from Guwahati to Kokrajhar.

Mevani said that this was a cowardly act by the Assam Police to use a female constable to harass him. “They put forward a woman to file a second FIR against me. I believe that there is nothing more cowardly than this. I want to say that this is 56 inch of cowardice.”

The use of ’56 inch’ was in reference to Modi, whose supporters have often projected the prime minister as a man with 56 inch of chest size.

The court had raised questions on the trustworthiness of the police’s version and granted bail to the lawmaker.

Assam is governed by the BJP and complaint against Mevani was filed at the behest of a complaint by a BJP office-bearer.