In a shocking development, two goons mercilessly killed a 20-day-old baby in Ahmedabad on Thursday night. According to news agency PTI, police have arrested two men, identified as Satish Pattni and Hitesh Marwadi, for the gruesome murder of the baby in the Meghaninagar area of Ahmedabad.

Local police inspector PG Sarvaiya was quoted as saying that a group of goons armed with sticks stormed the victim’s family on Thursday night and began to mercilessly thrash three women in the family. The motive, according to the officer, was believed to be ‘some old grudge or previous enmity.’ “They even hit the baby girl Khushbu (Laxmi’s daughter) on the head, causing her death,” Sarvaiya added.

While the 20-day-old baby died, her mother Laxmi and aunt sustained severe injuries. Deputy Commissioner of Police Niraj Badgujar said that efforts were on to arrest the remaining three goons.

Both Satish Pattni and Hitesh Marwadi are known criminals and have several criminal cases filed against them.

The latest incident of a gruesome murder of a baby girl comes just days after two men, Zahid and Aslam, brutally killed a 2 1/2-year-old baby in Uttar Pradesh’s Aligarh due to ‘an altercation over money between them and the father’ of the victim. This had prompted members and supporters of the right wing brigade to launch a tirade on social media demanding justice. They were joined by TV channels and their representatives, who provided endless coverage to the Aligarh murder story.

While celebrities such as Virender Sehwag and Raveena Tandon took to Twitter to post false claims of rape to sensationalise the murder of the baby in Aligarh, some journalists were seen giving a communal angle. For example, Bhupendra Chaubey of CNN-News18 shockingly tweeted referring to the killers of the Aligarh baby as ‘Muslim men.’ Faced with widespread criticism, Chaubey deleted the controversial tweet. 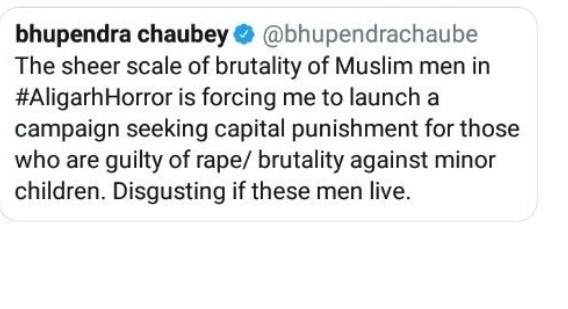 Such was the desperation to add communal colour to the Aligarh murder that even a Gujarat IPS officer resorted to trolling of Bollywood actress Swara Bhasker since the latter was vocal during the gang-rape and murder of an 8-year-old girl in Kathua last year.

Journalist Shivam Vij was the only journalist, who highlighted this hypocrisy when he wrote, “20-day old toddler. Bludgeoned to death by six goons in Ahmedabad in the model state of India, Gujarat. No national outrage. Outrage factories looked at the name of the accused. #NotMuslim. The 20 day old child’s life would have mattered if the killers were Muslim.”

20-day old toddler. Bludgeoned to death by six goons in Ahmedabad in the model state of India, Gujarat. No national outrage.

Outrage factories looked at the name of the accused. #NotMuslim. The 20 day old child's life would have mattered if the killers were Muslim, pic.twitter.com/gYQ14Nko80

The two gory incidents of murder in the last one week have exposed the glaring hypocrisy of the Indian media and other flag-bearers of right wing agenda in India. This also shows just how desperate they are to create a hysteria among Hindus against Muslims in India.