Aaj Tak anchor Rohit Sardana was recently left red-faced after cricket legend Sunil Gavaskar admonished him on LIVE TV over the raging controversy on MS Dhoni’s gloves with  the army insignia on them. Sardana was debating the controversy over the ICC’s direction to the Indian cricket board to ensure that the former India captain did not wear the gloves with the army insignia in the team’s next match against Australia on Sunday. 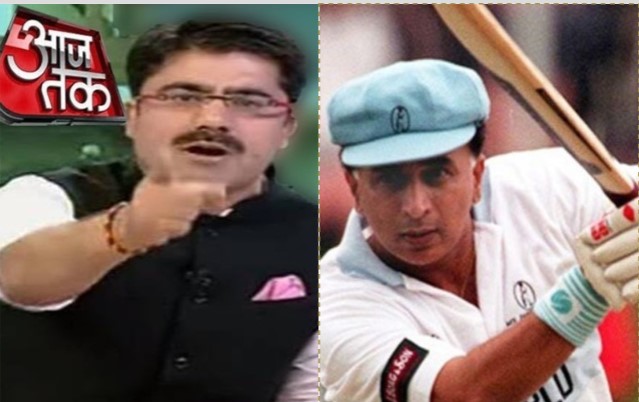 Before he asked Gavaskar, who was joining the channel from England, he went on to inform the audience that the Sports Minister Kiren Rijiju had tweeted in support of Dhoni and said that India should support Dhoni and present its case strongly before the ICC. Former army chief and now a minister in the Centre, General VK Singh, too has tweeted a while ago saying that we mustn’t compromise the national pride. We’ve heard many ex-players all throughout the day. They are also saying the same thing; he added.

Then addressing the legend, Sardana said, “Sunil Gavaskar, you must have seen the sentiments in the media and on social media. Their sentiment is different from your stand. People here are saying that we should even boycott the World Cup if the ICC doesn’t allow Dhoni to play the match by wearing the same gloves.”

Gavaskar, who was patiently listening to the anchor’s long rant, responded in his own inimitable style and said, “Of course, do it, do it, do whatever you wish. It wouldn’t make any difference” Gavaskar paused briefly and then continued, “Who will win the World Cup for you if they return home? Have you ever thought of this? That’s it. You talk for the sake of talking. Think before you talk.”

Other social media users too made similar comments:

Even BJP’s Rajya Sabha MP Subramanian Swamy has advised former India captain Mahendra Singh Dhoni to comply with the ICC rules and not wear his keeping gloves with the army insignia on them.