The Bombay High Court on Wednesday came down heavily on Arnab Goswami’s Republic for its media trial in the Sushant Singh Rajput’s death case. Mincing no words, the Bench comprising Chief Justice Dipankar Dutta and Justice GS Kulkarni warned the TV channel to not cross its boundary. 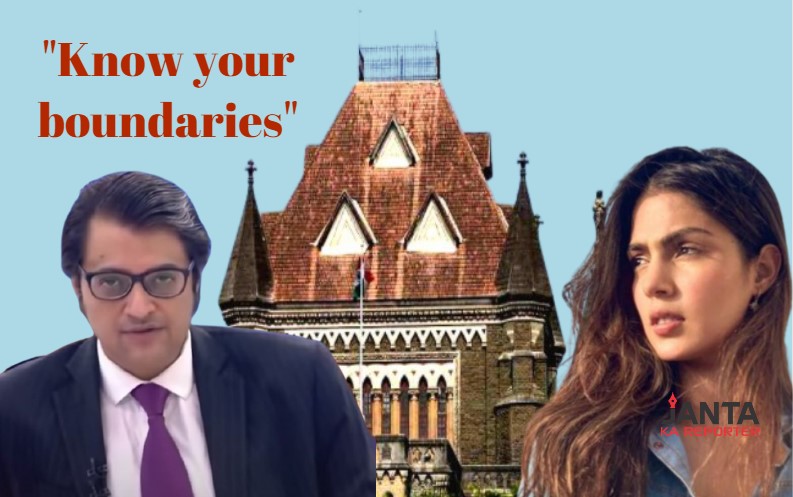 The court, according to Livelaw, told Republic TV, “We are only saying you must know your boundaries and within your boundaries, you are allowed to do everything. Do not Cross-Over.”

The court also asked the Republic TV lawyer, “When a case is under investigation and the issue is whether its a homicide or a suicide and a channel is saying it is murder, is that investigative journalism?”

Court asks Republic TV Counsel: When a case is under investigation and the issue is whether its a homicide or a suicide and a channel is saying it is murder, is that investigative journalism?#RepublicTV #SushantSinghRajputDeathCase #SSRCase

Goswami’s TV channel submitted before the court that the Supreme court had accepted there was something amiss in the Sushant Singh Rajput death case. “Which is why it directed CBI to come into the picture,” Republic TV told the Bombay High Court.

The high court said that the investigative powers were given to the police under the CRPC. The high court Bench also referred to Republic TV’s social media hashtag #ArrestRheaNow. The Republic TV defended saying that the hashtags were created ‘for public opinion.’

The court asked, “Is this part of investigative journalism? Asking the public about their opinion on who should be arrested?” It added, “These hashtags are about settling personal scores.”

The high court also expressed its resentment over TV channels not adhering to suicide reporting guidelines. It asked, “Don’t you have semblance for the death of the deceased? It is so unfortunate.” “Every time you are saying Investigative journalism, investigative journalism……” the court told Republic TV lawyer.

The bench said that it was not ‘for a moment suggesting that the media’s throat should be throttled,’ adding that ‘we are only on the short point as to whether the Programme Code is violated or not & whether your reporting contravenes any of the laid down norms or not.”

The bench then slammed Republic TV for playing the role of judges in its bid to hold media trial. It asked, “You posted story only basis post mortem? If you are so interested in unearthing the truth, you should have looked at the CRPC! Ignorance of law is no excuse. You become the investigators and prosecutors, judges. What is use of us then? Why are we here?”

The court also asked the NBSA that If their existing measures on programme code violations were effective, ‘we would not be in this situation today.’

The hearing will now resume on Friday.