The Enforcement Directorate on Friday conducted a series of raids to multiple premises in four states, all linked to IAS officer Pooja Singhal, who is currently serving in the Jharkhand government as the mining secretary. The ED recovered a whopping Rs. 19 crore cash from a chartered accountant linked to Pooja Singhal. 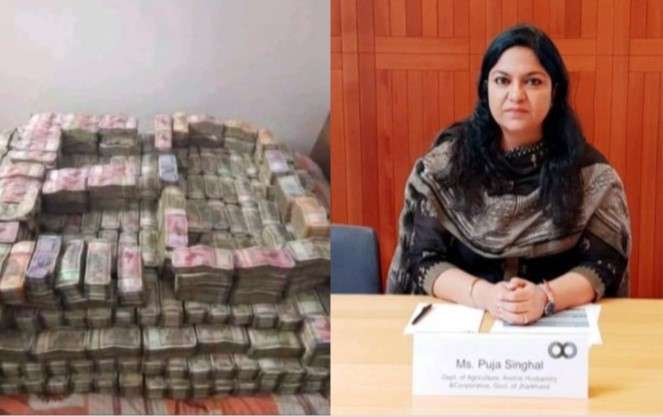 According to the financial probe agency, the raids in Jharkhand, Bihar, West Bengal and Punjab were part of its probe into a case of money laundering. This was after allegations surfaced that the state government led by Hemant Soren had diverted the funds meant for the MGNREGA scheme.

Although the investigation by the ED is linked to a five-year-old case, the discovery of Rs. 19 crore comes at a time when Jharkhand Chief Minister Hemant Soren is facing serious questions on corruption. Soren is accused of allotting a mining lease in his favour as well as a plot of land to his wife.

Singhal cleared her civil services exams in 2000 before being posted as the District Collector in Khunti, the district at the centre of the MGNREGA scam. She also served as the Agriculture Secretary in the previous BJP government. She has also served in Chatra, Khunti and Palamu before making her way up to the higher corridors of power in Jharkhand.

As Deputy Commissioner of Palamu, Singhal was accused of transferring nearly 83 acres of land to a private company for mining.

How Twitterati reacted to discovery of Rs. 19 crore cash:

Enforcement Directorate raids locations of #Jharkhand Mines Secretary, IAS #PoojaSinghal in Ranchi and recovers ₹25cr in cash.Also, Pulse hospital of Pooja and her husband Abhishek Jha is being searched.

CM #HemantSoren is in news as he has alloted a mine tender in his own name pic.twitter.com/Av9DFi4XP4

After all the hard work in preparation for #UPSC, away from celebrating festivals and family festivals, when you get qualified for the prestigious #IAS job, what do you end up doing?
Become a muneem ji of corrupt netas and end up getting punished & disgraced like #PoojaSinghal. https://t.co/ViDNoFkW1N

How I wish, I should have applied for #UPSC when I had time. Thought that IAS posts require immense integrity but now realizing it jus needs money counting machines !!#PoojaSinghal #Jharkhand https://t.co/LWGU8pCmy0

Pooja Singhal and her husband have kept details about their children away from the public. While her current salary is known, the government’s pay guidelines show that the basic per month salary of an IAS officer starts at Rs.56,100. This does not include allowances such as TA, DA, and HRA and can go on to reach Rs. 2,50,000 for a Cabinet Secretary. With 22 years of service, it’s safe to say that Singhal would be earning the higher end of the salary meant for IAS officers.