Union Minister Smriti Irani is facing brutal trolling for her old tweet taking a potshot at the then Congress government at the Centre led by Manmohan Singh. Irani, then in opposition, had launched a tirade at the Manmohan Singh government for raising the price of domestic LPG gas by Rs.50 per cylinder. 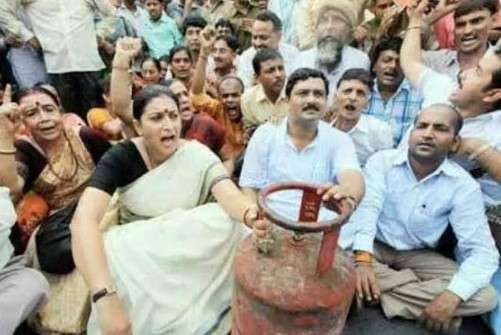 The BJP had announced Bharat Band, a nationwide stir against the rising prices of essential commodities.

However, her own government on Saturday announced another hike of cooking gas by Rs. 50, taking the price of one cylinder to Rs. 999.50. The cost of a commercial cylinder has now increased to Rs. 2355.50.

During the Manmohan Singh government, the cost of a subsidised cooking gas cylinder stood at around Rs. 400. The Modi government, which Irani is part of, gradually ended the subsidy for most people since coming to power in 2014. This means that most Indian consumers are now being forced to buy an LPG cylinder for domestic consumption for more than twice the rate at which they bought the same before 2014.

As expected, netizens wasted no time in taking potshots at Irani, reminding her about her old tweet.

50 rupee hike in LPG!!!!! N they call themselves Aam Aadmi ki Sarkar. What a shame!

One wrote sarcastically, “Thank you Smriti Irani for raising your voice against this corrupt govt !” Another asked, “Smriti irani ji now wht shld public call ths NDA BJP Sarkar can u tell me?”

Thank you Smriti Irani for raising your voice against this corrupt govt ! pic.twitter.com/yDxZWA2CJx