British Olympic hero, Sir Mo Farah, has stunned everyone by publicly admitting that he hid his real identity all his life and his real name was Hussein Abdi Kahin. The four-time Olympic champion told a BBC documentary that he was illegally brought to the UK as a child and his traffickers gave him the identity of Mohamed Farah, who was another Somali child meant to board the UK-bound plane. 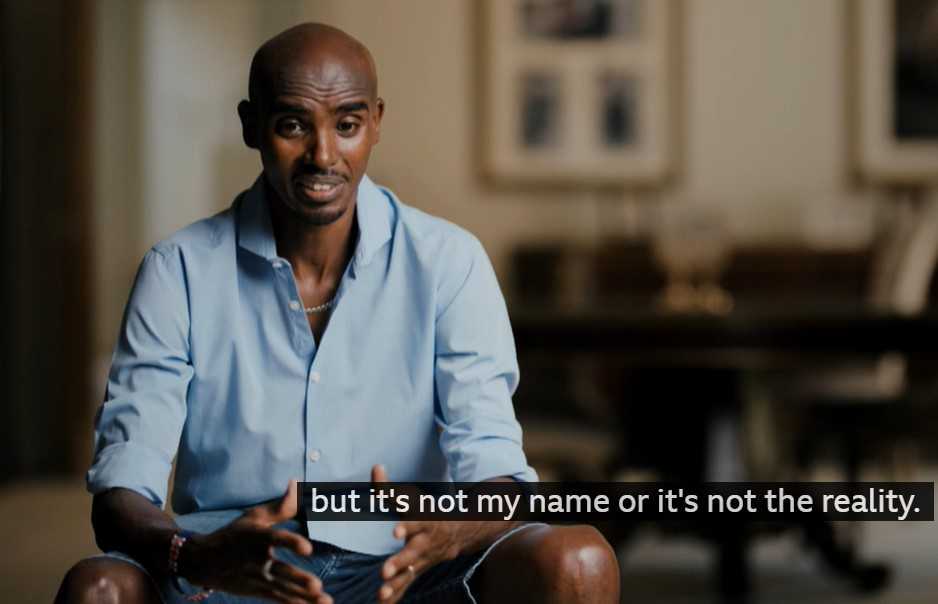 Sir Mo Farah told the BBC, “The truth is I’m not who you think I am.” The champion athlete said that he decided to tell the truth despite knowing that his action could result in his British nationality being taken away. Even his barrister warned him of potential consequences.

39-year-old Sir Mo said, “Most people know me as Mo Farah, but it’s not my name, or it’s not the reality. The real story is I was born in Somaliland, north of Somalia, as Hussein Abdi Kahin. Despite what I’ve said in the past, my parents never lived in the UK.”

He added, “When I was four, my dad was killed in the civil war, you know as a family we were torn apart.

“I was separated from my mother, and I was brought into the UK illegally under the name of another child called Mohamed Farah.”

Sir Mo became the first British track and field athlete to win four Olympic Gold medals. His wife, Tania Nell was instrumental in convincing him to tell the truth since she realised that ‘there was lots of missing pieces to’ her husband’s story.

Sir Mo said that his children have motivated him to be truthful about his past.

Who Is Real Mo Farah?

Sir Mo said in the BBC documentary that he always wondered about the well-being of the child whose place he had taken to travel to the UK.

He said, “I often think about the other Mohamed Farah, the boy whose place I took on that plane, and I really hope he’s OK.

“Wherever he is, I carry his name, and that could cause problems now for me and my family.”

In the documentary, Sir Mo was reunited with the real Mohamed Farah. The British champion athlete told him, “I can’t believe that I’m speaking to you. I carry your name and for many, many years, I carry that with me, and I’m proud you know what I have achieved.

“But as a person I always wonder where’s Mohamed, is he okay, what would life have been like for him?

“I think about it all the time and in person I just wanted to get in touch and to see how you’re doing.”

Sir Mo said, “I just wanna say one thing to you, thank you so much, I use your name.

“I came here as a child and I just wanna say thank you, and it’s been hard, difficult.”

Sir Mo said in the documentary that he was about eight or nine years old when he was taken from home to stay with family in Djibouti. He was later flown over to the UK by a woman he had never met and wasn’t related to.

The woman told him that he was being flown to Europe to live with relatives there – something he says he was ‘excited’ about. Sir Mo said that he had ‘never been on a plane before.’ The said woman, his trafficker, told Sir Mo to say that his name was Mohamed. His photo was pasted on his travel document next to a name, which read, ‘Mohamed Farah.’

As soon as Sir Mo arrived in the UK, the woman took him to a flat in Hounslow. She took the piece of paper, which had Sir Mo’s family contact details. “Right in front of me, she ripped it up and put it in the bin. At that moment, I knew I was in trouble,” Sir Mo said.

He had to do household work and childcare if he wanted food in his mouth. The woman told him that he needed to keep quiet if he ever wanted to see his family back home.

“Often I would just lock myself in the bathroom and cry,” Sir Mo said in the documentary.

He was allowed to join school only when he was 12 when he was enrolled in Year 7 at Feltham Community College. His PE teacher, Alan Watkinson, said that he saw a real transformation in him the moment he hit the athletics track. “The only language he seemed to understand was the language of PE and sport,” Watkinson said.

He told his PE teacher about his real story including his fake identity. Watkinson informed the local government services and helped him find a new foster family.