Controversial anchor Sudhir Chaudhary this week announced that he had joined rival Aaj Tak of India Today Group days after leaving Zee News. The news came amidst reports that Chaudhary was sacked from Zee News in the wake of Subhash Chandra’s defeat in the Rajya Sabha elections. However, the news of Chaudhary joining Aaj Tak triggered jokes and meme fest on social media as many called it a reunion of two ‘nano chip specialists’ with a reference to Sweta Singh’s famous video explaining the benefits of mysterious chip in the new Rs. 2,000 note. 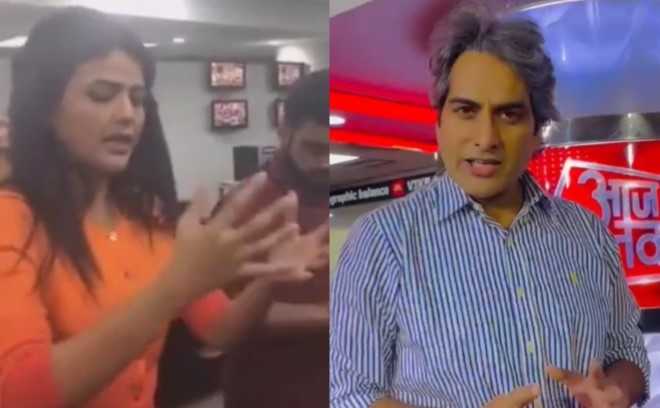 Aaj Tak tweeted a video of Chaudhary announcing his new appointment. In the video, Chaudhary could be seen informing his supporters from the Aaj Tak office about his new job. “I came to know from social media that you are quite restless and missing me and my show a lot. I haven’t presented my 9 PM show for a long time. As I had promised to not keep your wait too long, I am now fulfilling my promise. I have now joined Aaj Tak and I will see you soon on this channel soon.”

Many found Chaudhary’s decision to join Aaj Tak surprising given that he was said to have ‘resigned’ from Zee News to start his own venture. Netizens are now wondering if reports of Chaudhary’s sacking were indeed true.

For others, the controversial anchor once became a butt of social media jokes because of his past involvement in peddling fake news. Chaudhary had sensationally created a fake narrative about the existence of a ‘nano chips’ in Rs. 2,000 notes. Even though the RBI had publicly rejected his claims, the controversial anchor never apologised or felt it necessary to issue a clarification.

Also joining the nano chip bandwagon was Sweta Singh of Aaj Tak, who too had earned her own share of notoriety by inventing a similar theory on the presence of nano chips in Rs. 2,000 notes.

It’s in this context that the news of Chaudhary joining Aaj Tak has triggered hilarious meme fest.

Sudhir Chaudhary will be an asset to AajTak. He’ll increase their revenue by at least ₹100 crore, that too in ₹2,000 currency notes with nano-chip technology.

Even Amitabh Bachchan recently trolled both Sudhir Chaudhary and Sweta Singh with a hard-hitting promo video of Kaun Banega Crorepati.