British tennis sensation Katie Boulter on Thursday set the Centre Court at Wimbledon on fire after she pulled off a stunning victory in the second round against 2021 runner-up Karolina Pliskova. After losing the first set 3-6, the 25-year-old British player won the subsequent two sets 7-6 (7-4) 6-4 to register an extraordinary comeback. Immediately after winning her match, Boulter made her way to Court 1 to watch the second-round men’s singles match between Britain’s Jack Draper and Australia’s Alex de Minaur. She was seen fervently supporting the Aussie since he happens to be Boulter’s boyfriend. 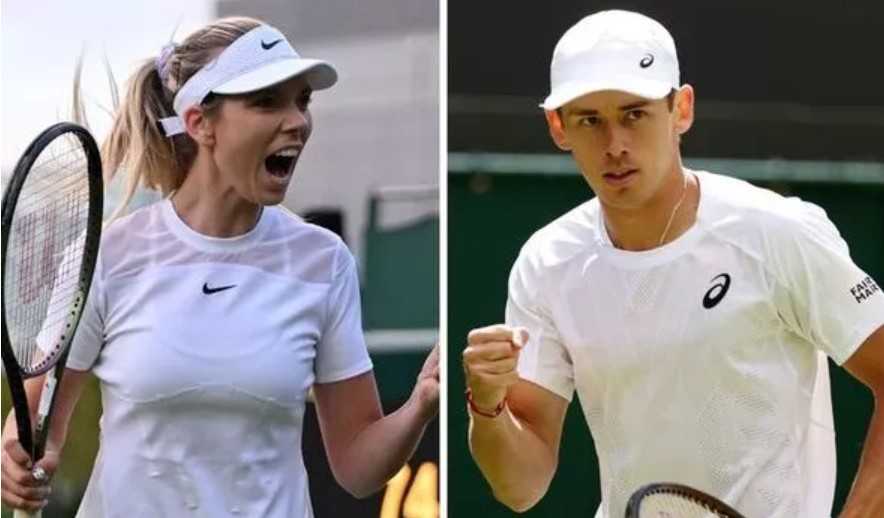 Boulter’s stunning victory over Pliskova on Thursday assumed significance since she lost her grandmother Jill only two days ago. Speaking after the match, Boulter said, “I’m going to get so emotional. I’d like to dedicate it to her.”

Boulter will face France’s Harmony Tan, who defeated Serena Williams in the first round before beating Spain’s Sara Sorribes Tormo in straight sets 6-2 6-4 in the second round.

De Minaur is an Aussie national but has spent a considerably large part of his life in Europe. The 23-year-old Aussie had relocated himself with his family to Spain when he was just five. He briefly returned to New South Wales in Australia but went back to Spain again. De Minaur has been residing in Australia since 2015 and even has a Spanish coach in Adolfo Gutierrez. Aussie tennis great Lleyton Hewitt acts as De Minaur’s advisor.

Boulter has held De Minaur in high esteem and publicly pronounced her love and admiration for the Aussie player, who was responsible for knocking Britain’s Jack Draper out of this year’s Wimbledon when he beat him in four sets 5-7 7-6 (7-0) 6-2 6-3.

Speaking about De Minaur, Boulter had earlier said, “Yeah, he’s a pretty good boyfriend… He’s someone that I have a lot of admiration for on and off the tennis court.

“He is the epitome of a fighter and someone that goes out and gives their all every single day. That’s what I aspire to be like. I feel like to have that around me and my team, it really helps me because I can push myself. He helps me do that… I’m a very lucky girl.”

Boulter was seen celebrating her boyfriend’s win over the fellow British player. It would be an incredible feat if both Boulter and De Minaur go on to win this year’s women’s and men’s singles titles.