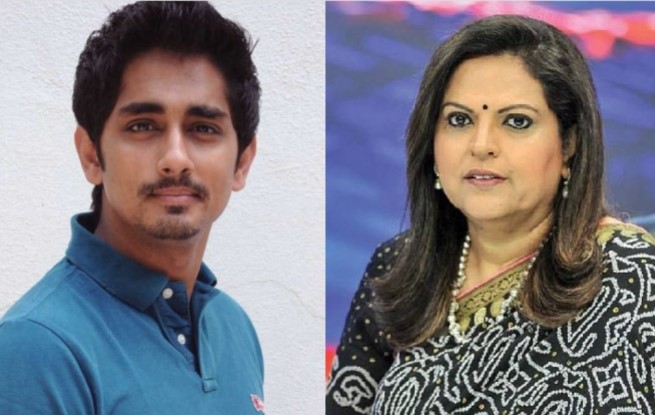 Sharing a tweet posted by Times Now with a video featuring Navika Kumar, the actor had written, “This woman is a Stoolkit. She will raise a stink for sure.”

Kumar wasn’t alone in spreading the BJP’s narrative on the much-talked-about security breach. While the BJP slammed the Congress government of Punjab for deliberately compromising Modi’s safety during his trip to Punjab, Chief Minister Charanjit Singh Channi rubbished these claims. Channi said the real reason for Modi’s frustration was the empty chairs at the venue of his planned rally in Ferozepur.

Modi was forced to return to Delhi after his convoy was stuck for 20minutes at a flyover in Bhatinda. He was scheduled to fly to Ferozepur but had decided to travel by road due to poor weather.

Several celebrities including badminton player Saina Nehwal had taken to social media to make extraordinary claims that Modi was attacked during his Punjab visit. While Saina faced condemnation for peddling fake news, Siddharth had targeted her with a ‘subtle cock champion’ jibe.

The National Commission for Women had asked police in Maharashtra and Tamil Nadu to register a case against Siddharth for outraging Saina’s modesty. Days later, Siddharth issued a public apology saying that Saina will always remain her champion.

But BJP supporters are now demanding a similar apology from Siddharth for Navika Kumar.

Feminist my Foot! Siddharth is repeat offender. What does he have to say about his rotten tweet on Navika?? @ncw @sharmarekha #Siddharth pic.twitter.com/Mwkxa5wDaS

He is a habitual offender. What about insult to Navika Kumar?

So silly of you. What about your remarks on Navika? Does this sound like someone who is a staunch feminist, is this also a joke, is this not an attack on someone. Have some shame. You are repetitive offender and abuser who doesn’t deserve a place in this society. Thats it. pic.twitter.com/mz1ibsZC6o