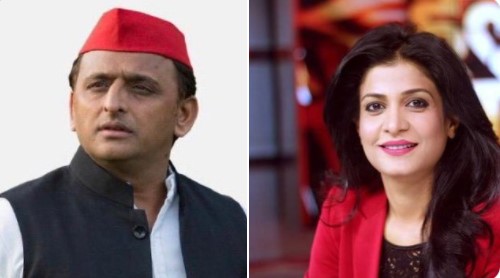 In the interview, Akhilesh said, “I’ve made a list of honest journalists. Your name is also there.”

Anjana, who was taken aback by Yadav’s sarcasm, was stuck for words for a few seconds before she replied, “The way you are saying this. You are once again playing the same game.”

Yadav said that ‘honesty’ was not a bad term.

A visibly angry Anjana said, “Time and again you are trying to indulge in a  mud-slinging game by repeatedly calling me an ‘honest’ journalist. What is the need for this sarcasm? What are you trying to say?”

Yadav replied, “What can I do if you get upset even by praise?”

Anjana said that she was not going to accept this insult from the former chief minister of Uttar Pradesh.

This wasn’t the only awkward moment faced by the controversial Aaj Tak anchor. At one point Yadav tricked her into stating that the BJP had mistakenly ordered raids on one of its own men thinking that the businessman belonged to the Samajwadi Party.

He was referring to Kanpur’s businessman Piyush Jain, who was recently arrested a day after the Goods And Services Tax (GST) authorities recovered close to Rs. 200 crore cash in their raids at multiple locations.

Yadav said, “Did the BJP not commit a mistake by raiding one of its own people?” Anjana said, “Yes, we did show the truth (on Aaj Tak).”

Yadav asked to spell out what truth she was referring to. Without realising that it was a trick question, Anjana said, “The fact was that they (the BJP) raided one of its own people based on wrong information.”

As expected, Twitter exploded with meme fest with many mockingly asking Anjana to file a defamation case against the Samajwadi Party leader for calling her ‘honest.’

Even Anjana Om Modi can’t beleive that someone called her “Imaandar” pic.twitter.com/iSXDiywSGe

after watching the hastag is trending

After seeing the trend #ImandarAnjana

Uttar Pradesh goes to the polls in seven stages starting next month. Anjana has had to face criticism for allegedly supporting the BJP in the guise of carrying out journalism. In September last year, there were at least three videos that showed how the Aaj Tak anchor made herself a source of huge embarrassment.