Uttar Pradesh Deputy Chief Minister Keshav Prasad Maurya recently walked out of a BBC interview after he was grilled about the genocidal calls made by pro-BJP Hindu religious leaders in Uttarakhand. 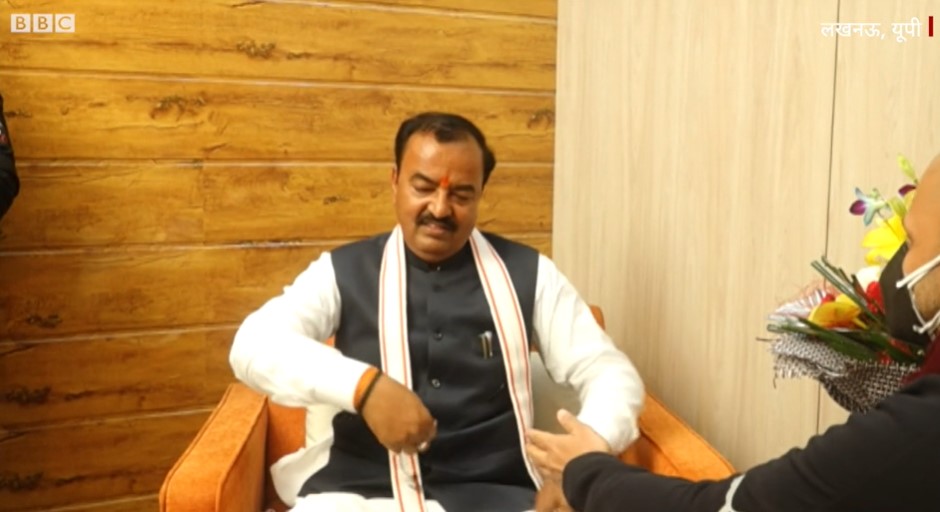 Maurya, who himself has been making atrocious statements targeting India’s Muslim community in a bid to polarise Hindu voters, appeared to be visibly enraged by the reporter’s decision to grill him about the genocidal calls made by a group of Hindutva terrorists, all known supporters of the BJP.

Maurya chided the reporter for not informing him about these questions well in advance so that he could prepare for the interview. He also justified the calls for ethnic cleansing of India’s Muslims as he said, “Religious leaders have the right to express their opinion from their platform. Why are you only talking about Hindu religious leaders?”

Also Read: Naseeruddin Shah lashes out at Narendra Modi for bigotry, silence over calls of genocide against Muslims, says “he derives some sorts of pleasure from this’

He added, “What religious leaders say in their meetings is their matter.”

“If you told me (that you would ask me about Hindutva terrorists), I would have prepared myself to answer your questions,” he continued.

Maurya shameless said that arresting Muslims for alleged celebration on Pakistan’s victory over India was sedition but calling for the genocide of Muslims was part of an individual’s fundamental rights.

He then announced that he was not interested in talking to the journalist from the BBC and ran away from the interview.

The so-called ‘Dharm Sansad (Religious parliament) in December was attended by known Hindutva terrorist Yati Narasimhanand, his accomplices Hindu Raksha Sena President Swami Prabodhanand Giri, Swami Anandswaroop, Sadhvi Annapurna and BJP leader Ashwini Upadhyay among others. Speakers called for the ethnic cleansing of Muslims as they said that Hinduism was in danger in India. They called for the arming of Hindus with one speaker suggested the solution in the genocide of 20 lakh Muslims.