Several media outlets including NDTV on Sunday claimed that stones were pelted at Delhi Police PCR can stationed outside expelled BJP leader Naveen Kumar Jindal’s residence in Laxmi Nagar. However, the Delhi Police have called the claims as ‘fake news.’ 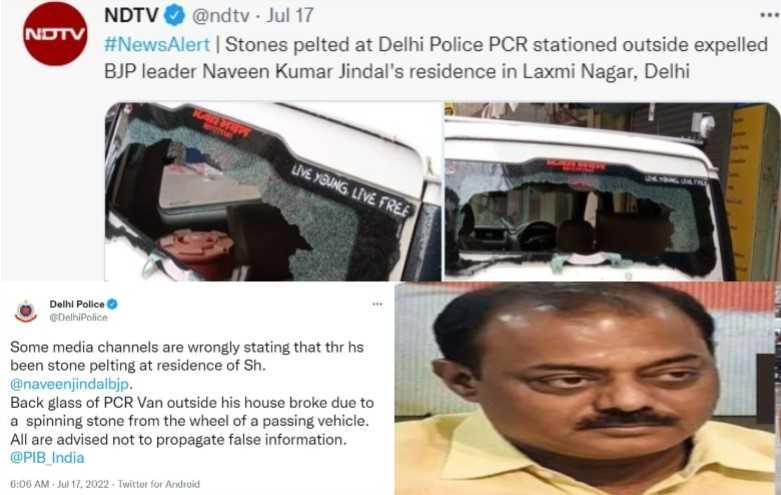 Naveen Kumar Jindal had courted controversy with his tweet against Prophet Muhammad (PBUH). Faced with international outrage, the BJP had expelled him from the party. The Delhi Police had provided him security in light of threats to his safety and posted a team outside his house.

Reacting to the claims made by several media outlets including NDTV, the Delhi Police tweeted, “Some media channels are wrongly stating that thr hs been stone pelting at residence of Sh. @naveenjindalbjp. Back glass of PCR Van outside his house broke due to a spinning stone from the wheel of a passing vehicle. All are advised not to propagate false information. @PIB_India.”

A senior officer from the Delhi Police issued a video message urging media outlets to not peddle fake news. A video message posted by DCP, East Delhi, said, “The news of stone pelting on PCR vehicle parked in front of Mr @naveenjindalbjp house is fake. In the incident, a rubble stone jumped from the pressure of a truck tire and hit the glass of the PCR vehicle. Don’t spread misleading news.”

Naveen Kumar Jindal had shared his controversial tweet in solidarity with Nupur Sharma’s objectionable comments on Prophet Muhammad (PBUH) made on Times Now. Several Islamic countries had registered official protests by summoning Indian envoys, forcing the BJP to take punitive measures against Sharma and Jindal. While Sharma was suspended from the primary membership of the party, the BJP had expelled Jindal from its organisation.