Union Minister Smriti Irani has joined the conversation on the viral newspaper ad by an Australian woman, who decided to shame her cheater husband with an expensive newspaper advertisement. 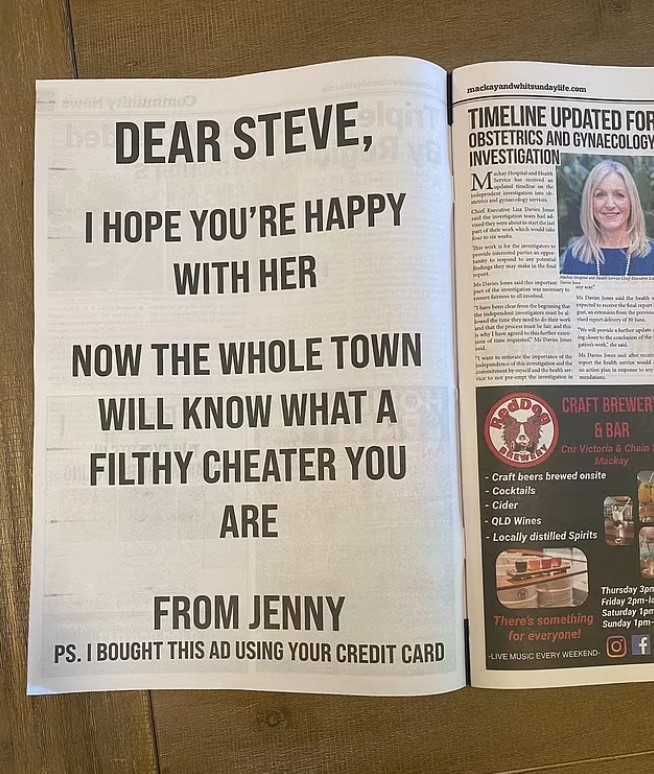 The viral full-page ad published in the regional Queensland newspaper, Mackay & Whitsunday Life, on Friday read, “Dear Steve, I hope you’re happy with her. Now the whole town will know what a filthy cheater you are.” The ad concluded with even more cruel line, which stated, “From Jenny. P.S. I bought this ad using your credit card.”

The advertisement went viral evoking reactions from netizens from around the world. Reacting to the ad, Irani wrote on Instagram, “The hell hath no fury ad.”

No one knows about the identity of the woman, who placed the ad. The newspaper in question has said that the ad was placed online by someone named Jenny. The full-page ad was worth between $1,500 and $2,000.

The controversy deepened further after a pub in Adelaide flashed a giant apology outside its business. The apology was issued by the pub’s duty manager, Steve, who wrote, “Dear Jenny, I’m sorry. From all the Steves.”

In a further twist, the newspaper has not charged the credit card after it went through the final artwork and the content of the ad. The paper has now urged Steve to come forward to pay the bill.

The newspaper is, however, indebted to Jenny for getting global attention to the publication. The paper said in a statement, “We do NOT know who Steve is, but apparently he’s been very bad.”

Mike McCann, sales manager for the Mackay & Whitsunday Life, jokingly said that he might get in touch with ‘Jenny’ and ‘send a bottle of wine’ to thank her for providing global publicity to the newspaper.

However, a number of netizens felt that the ad was a PR stunt to promote a new TV series.