Known BJP hatemongers are facing public shaming for their dangerous tweets falsely accusing Bollywood superstar Shah Rukh Khan of spitting at the mortal remains of Lata Mangeshkar. Faced with public outrage, at least one BJP hatemonger has issued clarification but the fake tweets have yet not been deleted. 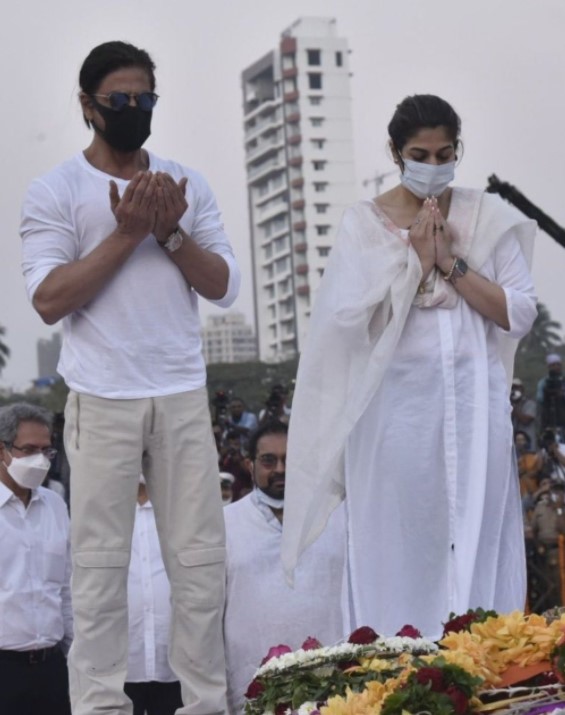 Leading the pack to peddle fake news was BJP’s Haryana IT Cell chief, Arun Yadav, who had shared a video of Shah Rukh Khan to ask, “Did he spit (at Lata Mangeshkar’s mortal remains)?” Another known fake news peddler Prashant Umrao Patel tweeted, “Shahrukh is Spitting!”

Another Hindutva bigot and former CBI Director, M Nageswara Rao, had also tweeted, “Did you @iamsrk spit at the funeral of #LataMangeshkar ji?. Being a public figure, you are required to give a public clarification immediately.”

In reality, Shah Rukh was merely praying by raising his hands to make dua (prayer) and blowing the air in accordance with a tradition, prevalent amongst many Muslims.

That cockroach from BJP who put out that hateful lie yesterday will disappear. So will his party & its troll farms.

@iamsrk ‘s work will outlast them all.

Some people are filled with hatred that they are misconstruing an act of a genuine dua. Why can’t they leave their Islamophobia for 1 sec atleast? Infact you all are spitting venom out there. So stop!!#ShahRukhKhan pic.twitter.com/GXHqYFeqvO

This guy knows exactly what he’s doing. He’s looking for his two- minutes of twitter fame by going after @iamsrk. He baiting. He knows this “sells”. Don’t rise to the bait. Don’t give him the visibility he’s looking for. Don’t RT or QT. Possibly, ignore. pic.twitter.com/c4sS6UAvWL

To be able to spin Shah Rukh Khan’s performing a Dua and blowing on Lata Mangeshkar, a sign of respect and blessing in his religion, to a defiling act like spitting only proves that so many out there only think about how to demonise Muslims next. pic.twitter.com/c9gfGGQXAz

Faced with public humiliation, hatemonger Arun Yadav issued a lame clarification saying that he was merely asking a question. Another hatemonger Rao has deleted his disgusting tweet.