Aaj Tak anchor Shweta Singh is facing widespread condemnation after she was accused of deliberately blocking India’s first Prime Minister Jawaharlal Nehru from old video footage. Angry netizens are calling her ‘cheap’ and ‘lowlife’ for her attempts to hide Nehru in an old video. 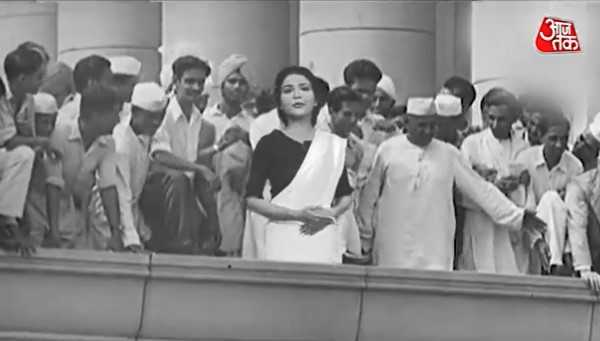 Sharing a promo video of an Aaj Tak programme on India’s independence day, Singh wrote on Twitter, “When our tricolour was hoisted in the free skies for the first time, a rainbow had emerged right at the same time. The world’s greatest nation India’s most emotional 24 hours. #15august1947 @aajtak Saturday at 8 pm.”

In the video shared by the controversial anchor, she was seen placing herself ahead of Nehru in the old video as she spoke about her special programme. Dressed in a black-and-white saree, she said, “The independence day is one day when we all celebrate, hoist the tricolour and observe this as a festival. Just imagine the kind of celebration when we got the freedom.”

The anchor, who earned notoriety for her bizarre theory on the presence of nanochip in a new Rs. 2000 note, placed herself carefully right in front of Nehru so that India’s first prime minister could not be visible in the historic video. This did not go down well with netizens as they began to give her grief.

Use Bole Bharat wrote, “Shame on You @SwetaSinghAT. This is how Aajtak Anchor Sweta Singh tried to block the footage of Jawaharlal Nehru on her show. What a shameless woman.”

User Stree wrote, “When talentless ppl can’t raise their standards, they try to pull the great ppl down to feel big. Sadly, Sweta is just some mud on the great man’s shoe and she can’t do anything to help herself.”

“#Shameless_Shweta_Singh apologize on live feed. This is happening again and again and shouldn’t be tolerated such lowest level of act. One thing is clear that this doesn’t happen in case of BJP, as she is loyal to them,” wrote user Maha_Indian.

Singh had become an object of widespread ridicule in the past when a viral video showed her confidently educating her Aaj Tak colleagues about the latest innovation related to Rs 2,000 note. She had told her captivating audience in the video, “…There are three things we know (on nano GPS chip in Rs 2,000). The new note has nano technology GPS. If there are too many notes lying together at one place, then not only will the law enforcing agencies be alerted about it but even the Income Tax department will receive a signal. Because the note will transmit a signal directly to satellite, which will reach there so that the money can be recovered.”