Not just Katrina Kaif and Aishwarya Rai, this Weekend Ka Vaar episode also grabbed a few eyeballs because of Salman Khan’s banter with Deepika Padukone as the two dragged Amitabh Bachchan and Sara Ali Khan in their conversation. To ensure that Sara did not feel upset, Deepika announced her love for the Simmba actress on the national TV. 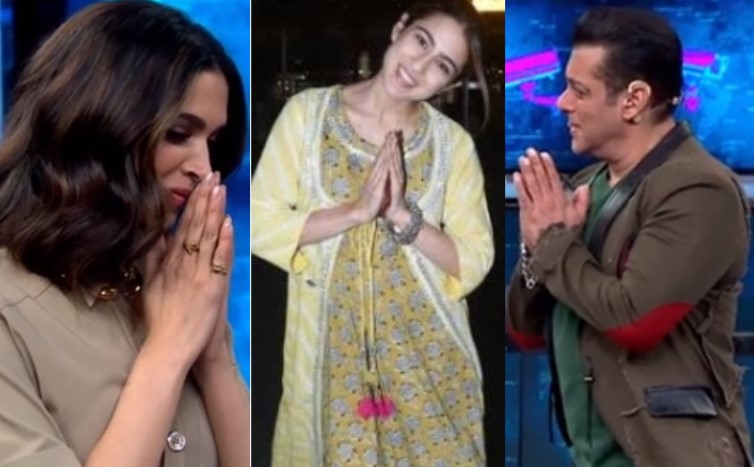 It all started with Salman welcoming Deepika on the Bigg Boss show on Sunday night. Deepika had arrived there to promote her show Chhapaak. Welcoming Deepika, Salman said, “People are praising this film (Chhapaak) a lot.”

Deepika replied by folding her hands, “Thank you.”

Salman asked jokingly, “When did you become Amit ji (Amitabh Bachchan)?” Bachchan is known to greet people by folding his hands.

Deepika replied, “I am learning from Sara Ali Khan.” Salman told her that Sara usually greeted people by saying aadab in Urdu. Deepika said, “No, she also greets people like this (by folding her hands).” Turning towards the camera, Deepika said, “Sara I love you.”

While speaking with Deepika, Salman had also sensationally revealed how his ex-girlfriends namely Aishwarya Rai, Katrina Kaif and Sangeeta Bijlani were not at fault in leaving him as he blamed his behaviour for the split. “They are right (in not loving me). I’m the worst person to love,” he had told Deepika.

Earlier Deepika had entered the Bigg Boss house to promote her film. She had also supervised a task involving the reality show contestants.