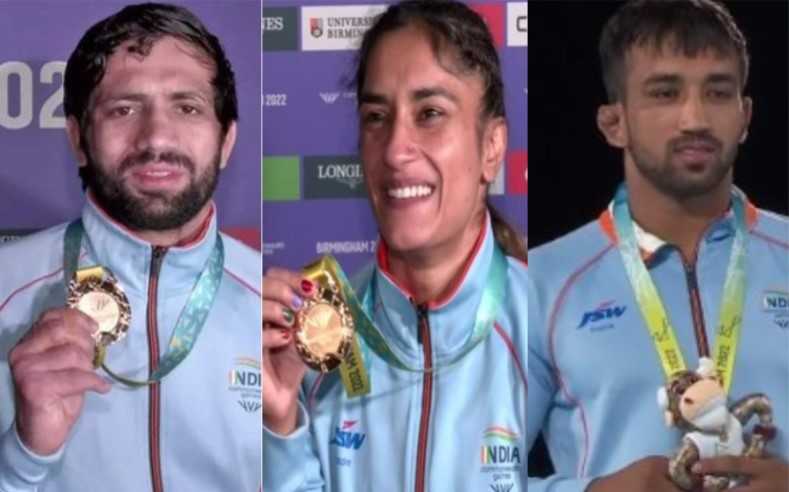 Pooja Gehlot on Saturday won a Bronze in Women’s Freestyle 50 kg by beating Scotland’s Christelle Lemofack Letchidjio. This was then followed by Ravi securing a Gold in the Men’s Freestyle 57 kg category by beating Nigeria’s Ebikewenimo Welson. Naveen won India’s second Gold by winning another India-Pakistan affair against Muhammad Sharif Tahir in the Men’s Freestyle 75 kg category. Vinesh won all her three matches to secure the third Gold for India in Women’s Freestyle 53 kg category, where the winner was decided using the Nordic system. Vinesh won all her three matches against opponents from Nigeria, Canada and Sri Lanka without any difficulties.

Also winning a Bronze in an India-Pakistan affair was Deepak Nehra, who defeated Tayab Raza in the men’s 97kg category. Pooja Sihag also won a Bronze in the women’s 76kg category.

Speaking to Janta Ka Reporter on Friday, Sakshi had said that India would maintain their medal rush even on Saturday. Sakshi, Deepak Punia and Bajrang Punia had won three Gold medals on Friday. India as a team had won six medals. Saturday’s medal haul means that India have now won 12 medals including six Gold in wrestling in Birmingham Commonwealth Games.

India also expect top medals in cricket and Badminton as the Games come to an end tomorrow. The Indian women hockey team will play for a Bronze today, while the women cricket team will aim to win the first-ever Gold in the game, which was introduced in the Games for the first time in history.