Archana Puran Singh of The Kapil Sharma Show has become one of the most popular entertainment celebrities on social media. Her popularity has soared leaps and bounds ever since she replaced Navjot Singh Sidhu as the judge of the Sony TV’s comedy show. However, one regular feature of The Kapil Sharma Show has been cruel jokes by Kapil Sharma, Krushna Abhishek, Kiku Sharda and other members of the comedy show targeting Archana. Many often wondered why Archana never protested about those demeaning jokes. The veteran actress has now finally revealed why she has mastered the art of laughing at herself. 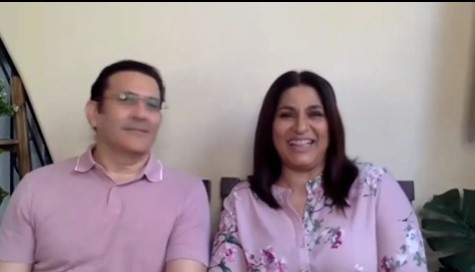 Archana was asked by her interviewer in a recent video interaction, “One beautiful quality of you Archana is that you’ve learnt to laugh at yourself. How do you manage that?” Archana, who was joined by husband Parmeet Sethi, replied, “Honestly speaking. I don;t feel bad (by cruel jokes) because I am confident that the person, who’s saying that to me actually respects me and loves me a lot.”

Parmeet revealed that the most memorable moment for him was that when he proposed to Archana after dating her for four years. Parmeet said that when he asked Archana if she was looking for someone else, she replied in negative. “I said neither am I,” he told his interviewer. Archana complained jokingly, “It’s almost like saying that aur koi nahi to tu chalegi.”

Archana recently trended on the internet after she extended her support to the extraordinary agitation launched by farmers against the three Farm Laws.

More recently, Kapil Sharma was at his menacing best last weekend when he asked Archana Puran Singh why she had not left The Kapil Sharma Show after taking a dig at his co-star’s night suit. Kapil had also accused the veteran actor of sleeping on the sets of the Sony TV’s comedy show while making fun of her designer’s outfit.