Pro-BJP actor Kangana Ranaut has hit back at her own supporters who questioned her decision to post a photo of herself in a bikini arguing that it went against the values of Hinduism. Kangana lashed out at her supporters by mocking ‘bhakts’ as she advised them to not lecture her on Hinduism. Others took a dig at her my making references to Diljit Dosanjh. 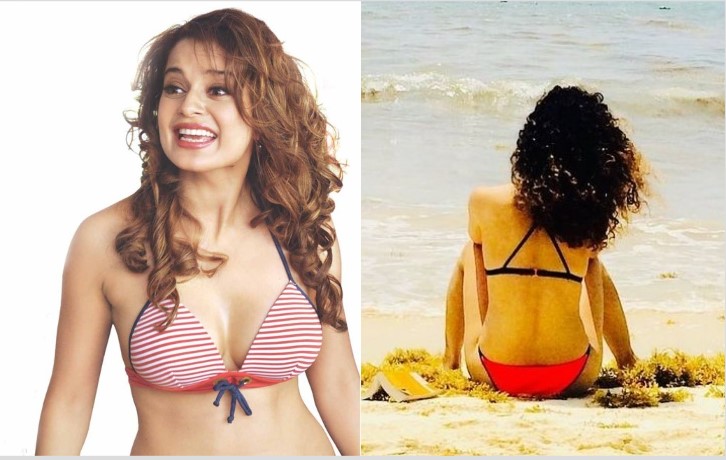 The controversial actor, who has become a darling of the Hindutva brigade for her hate speeches against Muslims, took to Twitter to write, “Some people are lecturing me on religion and Sanatan after seeing my photo in a bikini. What will happen to them if Goddess Bhairavi arrives in front of them with her hair untied, without any clothes and blood-thirsty image. Tumhari to fat jaayegi and you call yourselves bhakts. Follow your religion and don’t become its authority.”

The controversy was triggered by Kangana’s decision to share her throwback photo in a bikini sitting at a beach in Mexico. While sharing the photo, Kangana had written, “Good morning friends, one of the most exciting places that I visited in my life is Mexico, beautiful but an unpredictable place, here’s a picture from Tulum a little island in Mexico ❤️”

Her photo had evoked a wave of criticism from her own supporters, who felt that Kangana had brought disrepute to both her religion and the image of Jhansi Ki Rani, whose character she had played in one of her recent films. One fan wrote, “You call yourself Jhansi Ki Rani and upload your photo in a bikini. Do you not have any shame?” “This doesn’t suit you -Kangana.”

One Hindutva supporter asked her on Twitter, “I don’t mind what you wear in your films, but if you start sharing photos in such dress, what will happen to those of us who call you Hindu lioness?” Another Hindutva supporter said, “Kangana ji, we’ve built your image as Jhansi Ki Rani. You must avoid sharing such photos.”

Others taunted her by warning that Diljit Dosanjh was on his way to meet her. Kangana was recently embroiled in a full-blown controversy after her decision to peddle fake news against two elderly women, Bilkis Dadi of Shaheen Bagh and Mahinder Kaur of Punjab, backfired spectacularly. Incensed by Kangana’s decision to insult two elderly women, Diljit had launched a tirade against Kangana, shutting her up on Twitter.

Kangana was not pleased with the support for farmers’ protests by Diljit and other celebrities such as Priyanka Chopra since the agitation by farmers is causing an embarrassment to the BJP, a party that she has been ardently supporting in the recent past.