Two prominent publications from the Times Group on Tuesday wrote scathing editorials denouncing the ‘dangerously divisive rhetoric’ of the BJP in the wake of the controversy over the objectionable remarks made against Prophet Muhammad (PBUH). Both Times of India and Economic Times minced no words in condemning the BJP for its politics of hate against Indian Muslims. This has prompted many to call out Times Group’s hypocrisy on the issue given the role of Navika Kumar of Times Now in fuelling Islamophobia in the first place. Times Now is the controversial TV channel belonging to the Times Group. 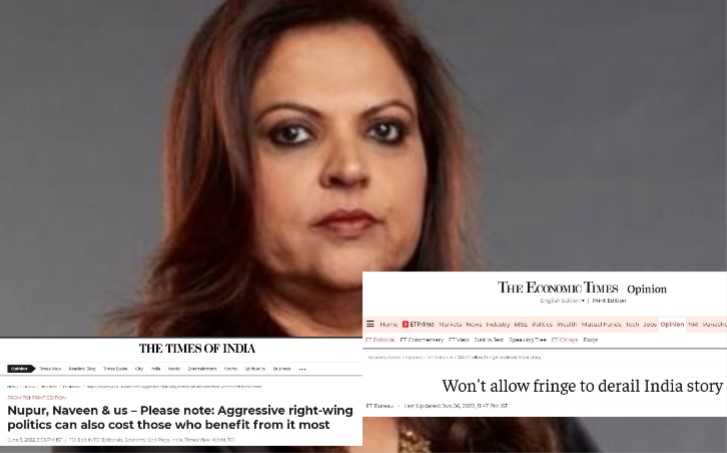 Titled ‘Nupur, Naveen & us – Please note: Aggressive right-wing politics can also cost those who benefit from it most,’ Times of India wrote in its editorial, “That it took diplomatic censure from strategically and economically important Gulf countries for BJP to take action against two spokespersons, whose appalling comments on TV and Twitter have been known for days, says everything about how much political discourse has coarsened in this country.”

It added, “And it’s a mess that didn’t just happen over one fervid news TV debate or one unacceptable tweet. It’s a mess that’s been building for some time.”

That ‘one fervid news TV debate’ unfortunately took place on Times of India’s sister channel, Times Now. The anchor of the show, Navika Kumar, has been facing widespread condemnation for not making any intervention when Nupur Sharma was making highly objectionable remarks against Prophet Muhammad (PBUH). Worse, the only time she broke her silence on the controversy was when she tweeted in support of Sharma.

Hours after Sharma mocked Prophet Muhammad (PBUH) on Times Now, another BJP spokesperson, Naveen Kumar Jindal, had tweeted repeating the same objectionable lines. Times of India wrote about them in its editorial, “Nupur Sharma’s and Naveen Jindal’s comments are products of this ecosystem. Therefore, if BJP and its government are serious about course correcting, just actions against these two won’t suffice. There will have to be firm signals from the top, and firm and quick actions if those signals are ignored by overzealous leaders and associated figures.”

Economic Times, another newspaper belonging to the Times Group, wrote a similar editorial. It said, “The BJP’s response on Sunday to two of its high-visibility and -volubility members guilty of making and disseminating Islamophobic remarks has been swift, effective and welcome. No attempts were made by the ruling party to defend the rabble-rousing packaged in the form of ‘whataboutery’ that has resulted in disturbances in Kanpur on Friday, and diplomatic protests from Qatar, Kuwait, Iran and the Saudi Arabia-based Organisation of Islamic Countries (OIC).”

Faced with global outrage, particularly from Islamic countries, the BJP was forced to suspend Sharma from the primary membership of the party and expel Jindal from the party.

Many prominent personalities on Twitter had tagged Times Group Chairman Vineet Jain to act against Navika, but he chose to look the other way. Though Times Now had issued a clarification and deleted the controversial video earlier, it never apologised or censured Navika.

Both Times of India and Economic Times have rushed to write hard-hitting editorials only after many countries around the world officially registered their protest on the matter.