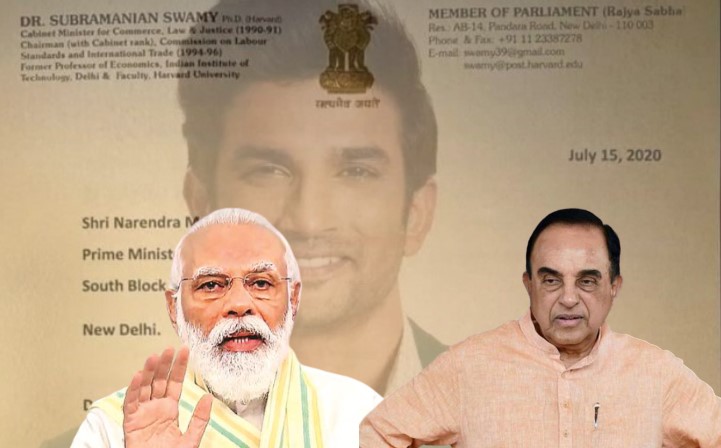 One of Swamy’s followers on Twitter sought to draw his attention to the alleged murder of Sushant. The follower in question tagged Swamy on Twitter as he wrote, “I think Sushant was murdered because his vision was too big, futuristic and at the same time he was Hindu actor who believed in Shiva. You may feel arbitrary reading this comment but please read and think from this angle too.”

He went on to add, “He (Sushant) may end up a challenge to anti-nationals in next 10 years. He may be celebrated as next amitabh bachan(sic) where khans are leading the Bollywood (Funds invested by D gang). His idea of taking poor children to space learning was new and definitely it will hurt elite groups doing business there (Investors in space technology). Small town boy to a potential phenomenon, unable to digest this by Bollywood mafia groups.”

This came just a day after the BJP MP wrote a two-page letter to PM Modi demanding a CBI inquiry as he said, “Although the Police is still investigating the circumstances after registering an FIR, I learn from my sources in Mumbai that many big names in the Bollywood film world with links to Dons in Dubai are seeking to ensure a cover-up is carried out by the Police so that voluntary suicide is concluded as the reson for the demise of Mr. Rajput.”

You can read Swamy’s letter to PM Modi below:

You are well aware, I am sure, of the untimely death of film actor Mr. Sushant Singh Rajput. My associate in law, Mr. Ishkaran Bhandari, has done research on the circumstances of his alleged suicide that he is said to have committed. Although the Police is still investigating the circumstances after registering an FIR, I learn from my sources in Mumbai that many big names in the Bollywood film world with links to Dons in Dubai are seeking to ensure a cover-up is carried out by the Police so that voluntary suicide is concluded as the reson for the demise of Mr. Rajput.”

“Since Maharashtra Government has many big wigs to share this view that Mr. Rajput be proved to have committed voluntary suicide, therefore, I am concerned that for public confidence Mumbai Police conducts a perceived impartial investigation.”

“Therefore, I urge you as the Head of the Government of India, and with your known cornpassion for innocent people who are framed, that you may consider advising the Chief Minister of Mahrashtra directly or through the governor to agree a CBI enquiry. The Mumbai Police has already hands full with Conavirus Pandemic issues and maintaining law and order under the circumstances. Hence, this laborious duty of conducting this enquiry where public credibility is being strained, a CBI enquiry would be the only way to retain public confidence.”

“I am sure that the Chief Minister of Maharashtra will agree to a CBI investigation upon such advice.”