Congress supporters on Thursday took to social media to share old photos of Delhi Chief Minister Arvind Kejriwal with RSS functionaries and at RSS event to establish the Aam Aadmi Party’s alleged links with the Hindutva brigade. The full-blown outrage on the microblogging site by Congress supporters came hours after AAP spokesperson Raghav Chadha held a special press conference amidst the COVID-19 pandemic to attack the Congress party. Chadha said that the Congress was on a ventilator and the party had no future. Incensed by Chadha’s attack, Congress social media footsoldiers trended hashtag #BJPkiAAP on Twitter. 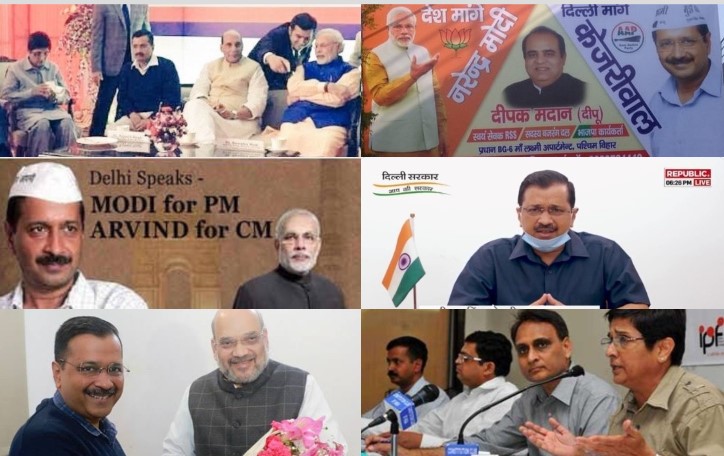 Among the photos shared by Congress supporters were Kejriwal sharing stage with Kiran Bedi and RSS ideologue and Rajya Sabha MP Rakesh Sinha. In another photo, Kejriwal was seen addressing at an event organsied by Swadeshi Jagran Manch, an RSS-affiliated outfit. Other photos showed Kejriwal sharing attending a programme organised by pro-BJP Sri Sri Ravi Shankar to share the stage with the then BJP President Amit Shah. Some users also dug out the screenshot of the AAP website screaming ‘Modi for PM, Kejriwal for CM’ slogan during the 2015 Delhi assembly polls. Faced with criticism, Kejriwal was forced to remove the headline for the fear of losing Muslim votes then.

Kejriwal had to earn plenty of condemnation for his decision to fund Arnab Goswami with lucrative ads of his government even though the controversial anchor is notorious for running a hate agenda on his TV channels. Many felt that this was another conclusive example of Kejriwal’s soft spot for the Hindutva ideology.

Everyone knows that Hazare’s RamLila circuses were hatched by RSS

The fact that the media & liberal journos all kept their eyes wide shut for years, speaks volumes. pic.twitter.com/DoWHrdhRfW

Kejriwal is a IITian. Despite knowing that Republic channel is toxic he decided to boost the revenues of that toxic news channel by using Delhi’s taxpayers money.

Because he was told by RSS to do so. https://t.co/ESmSxt1Ua2#BJPkiAAP

Just a reminder why @AamAadmiParty had a sudden press conference for a state where their vote share was less then NOTA#BJPkiAAP pic.twitter.com/jnmlazawzm

FREE ADVICE:
Still if there is anyone who believe, @AamAadmiParty & @ArvindKejriwal is against RSS/BJP ideology, please consult a doctor? immediately.#BJPKiAAP @LambaAlka pic.twitter.com/LsOQegMmxi

Arvind Khujliwal Was The Hidden Spy Of RSS And Now The Official Agent Of BJP That Stands For #BJPkiAAP. pic.twitter.com/SlKJMD036q

Chadha on Thursday said that that the Congress ‘neither has any future nor the Congress party give any future to this country.’ He had attacked the oldest party of India by saying that it was on a ventilator. Chadha had also tweeted, “Congress is old, frail and on ventilator. No plasma therapy, Hydroxychloroquine, Remdesivir or other medicine can save it from the impending demise.”