Ever since Shloka Mehta became the daughter-in-law of Mukesh and Nita Ambani, she has found herself under considerable media spotlight. One of the most-talked-about aspects of her public appearances has been her fashion quotient. Such was the appeal of her no-makeup style that even Shahid Kapoor’s wife Mira Rajput was once said to have emulated Shloka Mehta’s fashion statement. Weeks later, Shloka appeared to have found a fan of her style within the Ambani family as Radhika Merchant, the future daughter-in-law of the Ambanis, decided to copy her unofficial sister-in-law’s look during a pre-wedding function recently. 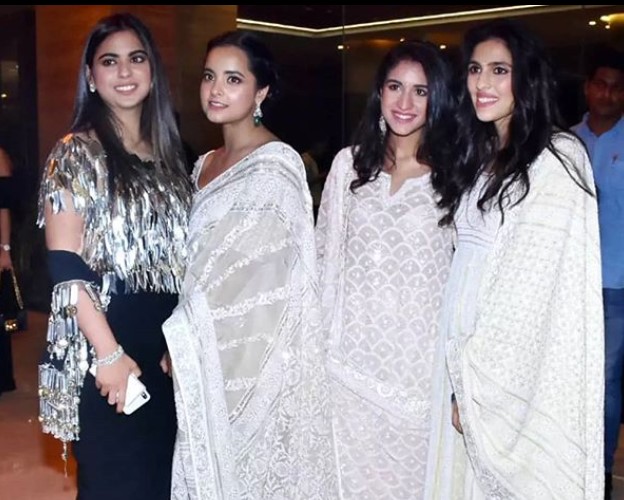 The similarity between Radhika and Shloka was quite astonishing when the two attended the sangeet ceremony of Arjun Kothari, nephew of Mukesh Ambani. Shloka chose to dress in a baby pink embellished lehenga with a cropped choli with hair pulled back and tied in a ponytail. As for her jewellery, it was a full set of an emerald and diamond choker, with earrings, maang tika, finger ring and bangles on both hands. Almost copying every aspect of Shloka’s look, Radhika too opted for a wide-shouldered embellished off white lehenga with a cropped choli with lace and feather effect. Once again, like Shloka, Radhika’s hair too was pulled back into a ponytail, and her accessories included a diamond necklace, earrings, maang tika, and bangles. (See below)

And this isn’t the only time Radhika has emulated her future sister-in-law’s look while attending a public event. In August, when the two attended the Reliance AGM, they were attired in almost identical ethnic wear. Both had chosen to wear a kurta and palazzo with  dupatta on their right shoulders. (See below)

In September, when the Ambani ladies including Isha Ambani attended the function organised by Abu Jani and Sandeep Khosla to celebrate 33 years in the fashion business, both Shloka and Radhika were seen in near-identical white ensemble.

A post shared by Shloka Ambani Encyclopedia (@shlokaakashambani_fp) on Sep 8, 2019 at 7:25am PDT

Recently, when Shloka flaunted her ‘red hot’ avatar at a pre-wedding ceremony of Arjun Kothari, a comparison was drawn with Aishwarya Rai Bachchan and Mira Rajput, who had attended the function with their husbands namely Abhishek Bachchan and Shahid Kapoor. The general consensus was that Shloka had outsmarted both Aishwarya and Mira in the fashion game.