‘Quit India’ movement gained momentum on Tuesday against Ramdev as Patanjali founder’s anti-Periyar remarks dominated proceedings in parliament on Tuesday. If this was not enough, Bhim Army chief Chandra Shekhar Azad warned Ramdev of consequences for his insulting remarks against Periyar. 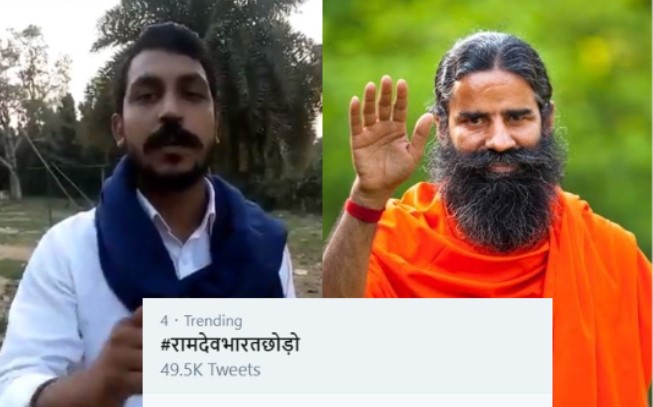 DMK MP in Lok Sabha, S Senthilkumar, expressed his condemnation for Ramdev’s remarks and added that the image of a reformist like Periyar must not be distorted. Senthilkumar said that Periyar had fought for social equality and woman empowerment.

On Twitter, angry users trended one more adverse hashtag targeting Ramdev after trending four damaging hashtags on the microblogging site over the weekend.

Ramdev is working inappropriately to influence our democratic elections through his #yoga and #swadeshi campaign. He is blatantly lying to his audience to boost bjp’s winning prospects. He is selling substandard products at high prices to generate funds for bjp. #रामदेवभारतछोड़ो pic.twitter.com/sWDE2csz4W

Periyar was an social activist, and politician who started the Self-Respect Movement. He is known as the ‘Father of the Dravidian Movement’. He has done exemplary work against Brahminical dominance, caste prevalence and women oppression in India

This comes days after Dalit supporters trended hashtags such as #Ramdev_Insults_Periyar and #ArrestRamdev.

Periyar, often dubbed as the South Indian Socrates, was an atheist and helmed social reforms by working against caste discrimination. The noted Dravidian patriarch had famously said that those who invented the notion of god were fools.