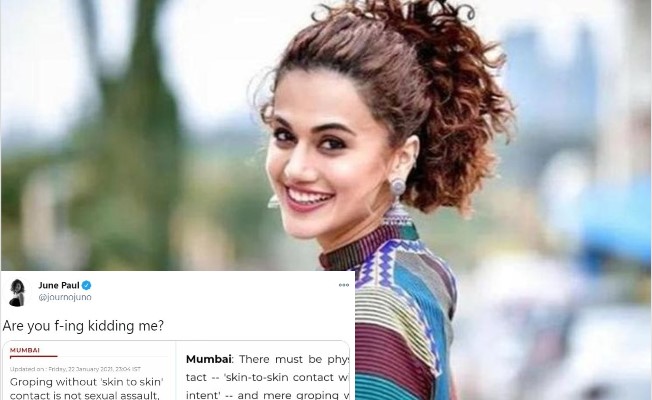 The Pink actor was responding to a tweet by a journalist, who herself was in a state of shock as she reacted angrily to the Bombay High Court’s order, “Are you f-ing kidding me?”

Sharing the journalist’s tweet, Taapsee wrote, “I tried for long but m still left with no words to describe how I feel after reading this.”

I tried for long but m still left with no words to describe how I feel after reading this. https://t.co/U8BKFrkhu8

Ironically, the Bombay High Court’s order was widely reported in the media on the day of the National Girl Child Day. Taapsee wrote sarcastically, “Got it now. Happy #NationalGirlChildDay2021.”

Netizens had reacted with anger after the Bombay High Court ruled that pressing the breast of a child without removing her clothes did not amount to sexual assault under Section 7 of the Protection of Children from Sexual Offences Act (POCSO). According to an order passed by the Nagpur Bench of the Bombay High Court, the act of groping a child without removing her clothes would only amount to ‘outraging modesty’ under the IPC.