Congress leader Rahul Gandhi on Tuesday launched a tirade against two of India’s richest businessmen namely Mukesh Ambani and Gautam Adani. The Congress leader accused Ambani and Adani of running the Delhi Police as their personal army. Gandhi’s outbursts came moments after he was detained by the Delhi Police for staging protests against the Narendra Modi government policies. 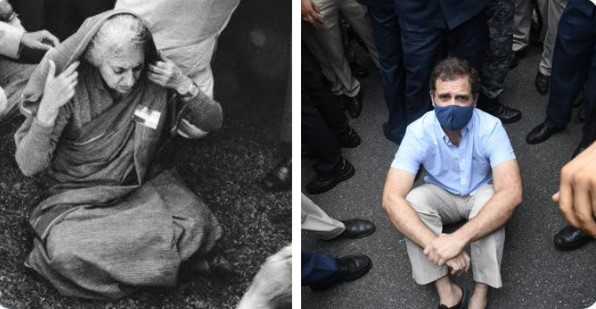 “This entire police system is being run by Adani ji and Ambani ji. They (police personnel) are the personal army of Adani and Ambani ji. You must identify them,” Gandhi told reporters.

Gandhi and his party colleagues were protesting against the price rise, GST and suspension of their MPs in parliament this week in the heart of the national capital when the Delhi Police detained them. The Delhi Police report to the Ministry of Home Affairs led by Amit Shah.

Gandhi sat on Rajpath, not far away from the parliament, as he expressed his desire to march towards the Rashtrapati Bhawan. The standoff lasted for nearly an hour before he was detained by the police along with his supporters.

The Congress later tweeted Gandhi’s photo alongside a similar photo of former Prime Minister Indira Gandhi. The caption read, “Extend the chain to me, Yes, yes Duryodhana Bind me. You have to come to chain me, but have you brought the chain long enough to tie me down? History is repeating.”

The timing of Gandhi’s protests coincided with the ED’s questioning of his mother, Sonia Gandhi, in a money laundering case. Rahul Gandhi and Priyanka Gandhi had accompanied their mother to the ED office before the Congress MP from Wayanad joined his party colleagues in protests.

Meanwhile, Congress president Sonia Gandhi has just left the ED office after about 2.5 hours of questioning in a money laundering case. She will return for further questioning after lunch.