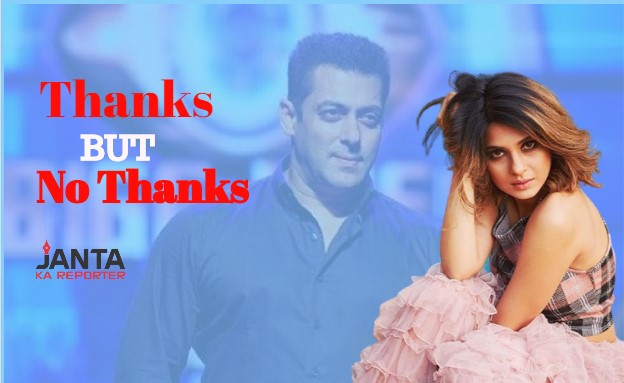 If the post by a Twitter handle, The Khabri, is anything to go by, then the Beyhadh 2 star was offered a whopping Rs three crore for the whole season of Bigg Boss, but she refused it. Apparently, Jennifer wasn’t very pleased with the negativity attached to the show.

The tweet by The Khabri also added that Jennifer’s Beyhadh 2 co-star Shivin Narang had reportedly accepted the offer and may be a part of the next edition of the reality show.

Confirmed !#JenniferWinget Refused #BB14 offer !
His Manager confirmed ! She was getting 3 crores for doing this season.#ShivinNarang Almost confirmed For #BiggBoss14 ,Last year he refused because of Beyhadh2,Now he is full set to enter #BiggBoss2020

Salman had come under fire for his support to the violence and repeated incidents of bullying by Siddharth Shukla inside the house. Siddharth was subsequently declared the winner of the show.

Such was the disgust to Bigg Boss that Adhyayan Summan had taken to Twitter to write that he will not appear on the show even if this ‘was the end of the world.’ He had told a fan, “I Would never go there don’t worry! That’s not my career goal.”

Rajeev, for his part, had said, “Not in Bigg Boss 14 Loud and Clear Shukriya.”

What had left the viewers of the reality show shocked during the last season was Salman Khan’s helplessness in acting against Siddharth Shukla. The Bollywood actor was seen acting with visible helplessness as he often vented his frustration at relatively smaller names such as Himanshi Khurana aka Punjab’s Aishwarya Rai, Asim Riaz, Rashami Desai and Arhaan Khan.

Many fans of the show were left stunned when Salman decided to publicly humiliate Arhaan by disclosing about his child from his first marriage on national TV. In June this year, it emerged that Arhaan was consulting a psychiatrist.

There are reports that Siddharth Shukla’s friend Jasmin Bhasin has confirmed her participation for the next edition of Bigg Boss. A report by Times of India said that TV actress Pavitra Punia too has signed the contract to be on the show.