In another embarrassment for Arnab Goswami and his former colleague, Navika Kumar, an author has moved the Supreme Court to inform about the hate speech spread by these two controversial anchors through their ‘toxic’ and ‘polarised’ TV debates. Author and researcher Dr. Kota Neelima informed the top court how 65% of Goswami’s TV debates between 31 July 2020 and 15 September 2020 and 69% of the total debates conducted by Navika Kumar from 16 June 2020 to 6 October 2020, were on one topic – the death of Bollywood actor Sushant Singh Rajput. 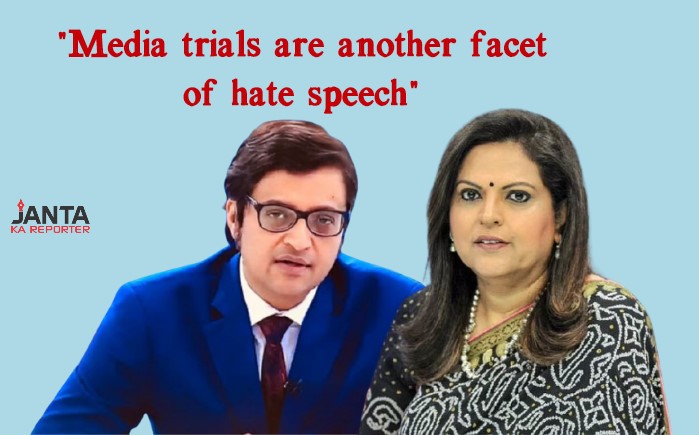 Dr. Neelima’s application was filed through lawyer Sunil Fernandes in the ongoing Sudarshan TV’s Islamophobic broadcast case. The application read, “Not only an overwhelming and inordinate amount of time is devoted to a single topic, the manner, tone, tenor and content of the ‘News Coverage’ and ‘TV Debate’ was highly toxic, polarised and filled with innuendos, salacious gossips, wild allegations and character assassinations.”

Seeking to expose the modus operandi of Goswami and Kumar, the application read, “Firstly, they deliberately create a hypothesis or a false construct/premise, for example, Sushant Singh Rajput was murdered and did not commit suicide. They will then insinuate that a top politician or a powerful personality is behind the “cover-up.

“Once this hypothesis and insinuation/innuendo is established, the viewer will be bombarded with a relentless barrage of “TV Debates”, “Hashtags”, “Evidences” and “Conspiracy Theories” which would convince the viewer of the hypothesis even before the prosecuting agency has completed its investigation and filed its charge-sheet.”

Dr. Neelima went on to explain that media trials were another facet of hate speech, adding that they ‘can take place for a variety of reasons, for instance, it can be in order to grab a higher share of Television Rating Points (TRPs) or it can be something more sinister whereby certain private television channels act as proxy propaganda machines for the Central government.’

The Supreme Court has stayed the broadcast of the remaining episodes UPSC Jihad, an Islamophobic series by Sudarshan TV. Dr. Neelima had earlier intervened in the case with Sangeeta Tyagi. Both of them had claimed that there was a striking similarity between the current state of the electronic media in India and Nazi Germany.