Kiku Sharda of The Kapil Sharma Show has finally ‘revealed’ the secret behind the unending laughter of his co-star, Archana Puran Singh. The comedian’s theory on why Archana has been laughing incessantly on the Sony TV’s comedy show left everyone including veteran actors, Padmini Kolhapure and Poonam Dhillon, in splits. Kiku, however, targeted Kapil Sharma for not laughing at his jokes as he mimicked Sunny Deol. 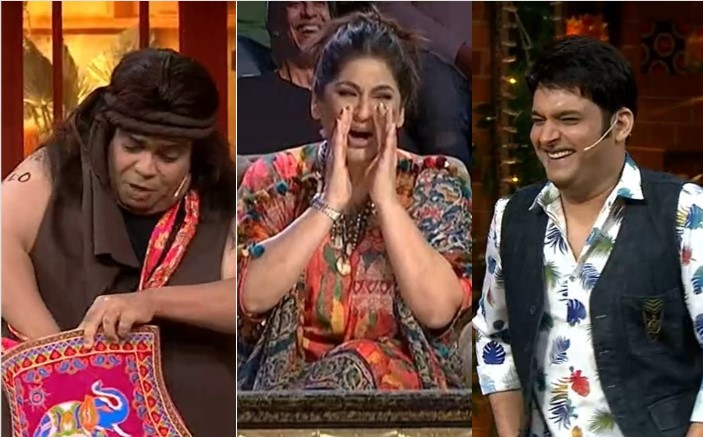 In a bid to impress Poonam Dhillon, who had acted opposite Sunny Deol in Sohni Mahiwal, Kiku decided to pose himself as Funny Deol. He teased Padmini Kolhapure that he was a big fan of her Merry Christmas song. This left everyone including Kapil Sharma puzzled as he asked, “Which Merry Christmas song?”

Kiku replied twisting the lyrics of the song from Prem Rog featuring Padmini and the late Rishi Kapoor. He said, “Merry Christmas mein tu nahi shayad.” Kapil corrected his co-star by saying, “Oye, meri qismat mein tu nahi shayad (Perhaps you were not meant to be in my life).”

That’s when Kiku revealed that he was simply joking. He continued, “This was my joke. Do you know that I keep cracking such jokes? One day I cracked a joke in front of Archana ji. She laughed a lot. She’s been laughing since then and I don’t even have to crack a joke now.”

Kiku wasn’t done yet as he targeted Archana again. He told the veteran actor, “No work is useless. And no job is too small. What do you say Archana ji?”

When Archana nodded in agreement, Kiku asked her, “When you this fact, then why don’t you work for a change? You sit on someone else’s chair and laugh at someone else’s jokes. What kind of job is this?”

Kiku asked Archana for Rs 100 so that he could pay the fare of his auto. When Archana said she did not have the money, Kiku asked, “If you don’t have even Rs 100, then where’s Sony TV’s money going?”

Padmini said that Kiku was he was funnier than the original Sunny Deol.

Kiku was recently in the news for his viral video in which he was seen mocking Arnab Goswami for his rant against Salman Khan, who’s the producer of The Kapil Sharma Show.