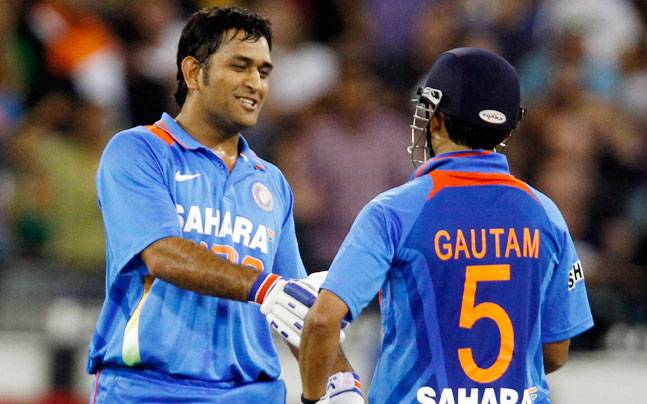 Reacting to Sanju’s knock of 85 in 42 balls, Tharoor tweeted, “What an absolutely incredible win for @rajasthanroyals ! I’ve known @iamSanjuSamson for a decade & told him when he was 14 that he would one day be the next MS Dhoni. Well, that day is here. After his two amazing innings in this IPL you know a world class player has arrived.”

Visibly irked by Tharoor’s comparison of Samson with Mahendra Singh Dhoni, Gambhir tweeted, “Sanju Samson doesn’t need to be next anyone. He will be ‘the’ Sanju Samson of Indian Cricket.”

Sanju Samson doesn’t need to be next anyone. He will be ‘the’ Sanju Samson of Indian Cricket. https://t.co/xUBmQILBXv

There have been reports of a rivalry between Gambhir and Dhoni even though the former India opener has denied these speculations. But, in April this year, Gambhir had registered similar resentment on Twitter after ESPNCricinfo posted a photo of Dhoni to mark the nine years of India winning its second ODI World Cup. The tweet by ESPNCricinfo had read, “#OnThisDay in 2011, the shot that sent millions of Indian into jubilation. The photo used by the website had shown Dhoni hitting the iconic six to win the end the 28-year-old World Cup drought for India.

Reacting to Dhoni’s photo, Gambhir had written, “Just a reminder @ESPNcricinfo: #worldcup2011 was won by entire India, entire Indian team & all support staff. High time you hit your obsession for a SIX.”

Just a reminder @ESPNcricinfo: #worldcup2011 was won by entire India, entire Indian team & all support staff. High time you hit your obsession for a SIX. pic.twitter.com/WPRPQdfJrV

In November last year, Gambhir had blamed Dhoni for denying him a century against Sri Lanka in the 2011 World Cup in the finals. He had told a website that he was not aware of the fact that he was batting at 97 until Dhoni reminded about his possible personal milestone. This, according to him, made him conscious and he got out.