Madonna fans have been left shocked by the excessive nudity displayed by their star in an NSFW act during a LIVE show. The famous pop star, mother of six children, was seen making out with fellow performer Tokischa before passionately kissing each other. 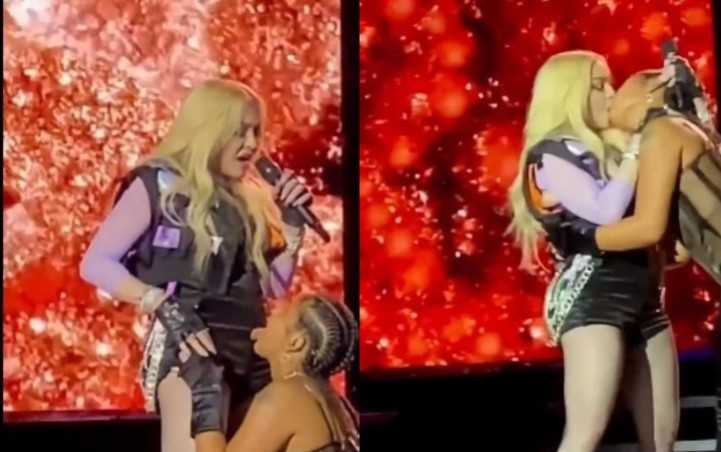 The Material Girl stunned everyone with her shocking adult-rated Finally Enough Love club performance at Terminal 5 in New York City as she kickstarted the much-awaited NYC Pride Weekend.

In viral videos, fervently being shared by fans on Twitter, the 63-year-old pop icon could be seen crawling seductively as she performed alongside Tokischa, a rapper from the Dominican Republic.

This prompted Tokischa to thrust her face into Madonna’s crotch area before licking all the way up to the latter’s belly area. Moments later both inserted their tongues into each other’s mouths for a passionate French kiss.

Madonna did not disappoint her fans as she performed several classics including Hung Up, Vogue, Holiday, Material Girl and Ray of Light among others.
The singer had opted for sparkly black hot pants, a lace top, chains for the bash and fishnets for the performance.

The development has left Madonna’s fans shocked as they took to social media to react.

AND YOU THOUGHT SHE WOULD DISAPPOINT, HELL TO THE NAH!#madonna pic.twitter.com/U3iuL41PUm

According to The Sun website, this was similar to Madonna’s 2003 VMAs kiss with Britney Spears onstage.

Tokischa too is known for her highly-sexualised performance during her LIVE shows in the Dominican Republic.

Madonna is not new to courting controversies with her racy content. She’s had to face the wrath of social media platforms in the past for sharing X-rated content. Many of her social media posts have had to be removed by Instagram in the past.

In 2021, Madonna posted graphic photos of her nipples and butt in bondage-style lingerie. As expected, Instagram had quickly removed them from its platform.