In an embarrassing development for the BJP just before the assembly elections, its youth wing leader, Pamela Goswami, was on Friday caught with 100 gms of cocaine in Kolkata. No sooner did the news on Pamela Goswami emerge, netizens began to link her arrest to the infamous ‘Mujhe drugs do‘ rant by Arnab Goswami. Others were quick to highlight that the Republic TV founder was not related to the arrested BJP leader even though both shared a similar surname. 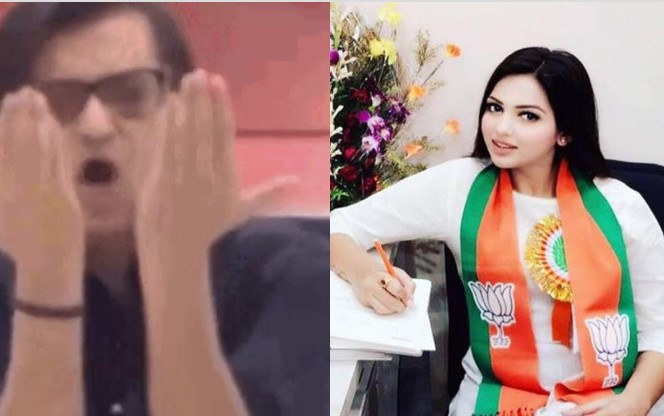 According to the police, Pamela Goswami, who is the state secretary of Bharatiya Janata Yuva Morcha (BJYM), was with a friend, identified as Prabir Kumar Dey, in her car when both of them were arrested on Friday. A report by news agency PTI said that police recovered 100 gms of cocaine from her handbag, and other parts of the car.

Cops from the New Alipore police station were reacting to a tip-off as they raided her just when she was busy trying to park her car outside her residence in the posh south Kolkata apartment. According to media reports, as many as eight police vehicles surrounded Pamela’s car before arresting her.

“She was involved in drug trafficking for quite some time. Today, we got information that she along with her supplier Prabir was reaching the spot to hand over the drugs to the purchasers,” a police officer was quoted by the news agency.

State BJP spokesperson Samik Bhattacharya said that he wasn’t sure if the cocaine was planted in her car. “The model code of conduct is yet to come into effect and the police are still under the state government. So, anything can be possible. We need to see whether the packets were planted inside her vehicle and her bag. I am not sure,” Bhatatcharya said.

Meanwhile, Twitterati have begun cracking jokes by dragging Arnab Goswami into the story by referring to one of his famous TV rants that had also provided fodder for a joke to Kapil Sharma’s colleague Kiku Sharda in the past.

Do you remember , Arnab ranting mujhe drugs do , drugs do mujhe ?
He was scoring it for Pamela Goswami ?

In October last year, the video of Kiku Sharda recreating Goswami’s mujhe drugs do rant with mujhe jug do (Give ma a jug) jibe on The Kapil Sharma Show had gone viral leaving the controversial anchor’s supporters fuming.