Dairy giant Amul too has joined the debate over the rising fuel prices after the cost of a litre of petrol breached the Rs. 100 mark in several parts of India. In its latest advertisement, the iconic Amul girl is seen to have lost her famous smile as a result of the historic rise in fuel prices. Amul’s decision to take a potshot at the Narendra Modi government for its inability to check the fuel prices triggered a meme fest with many predicting a ‘CBI raid’ at the offices of the popular dairy brand. 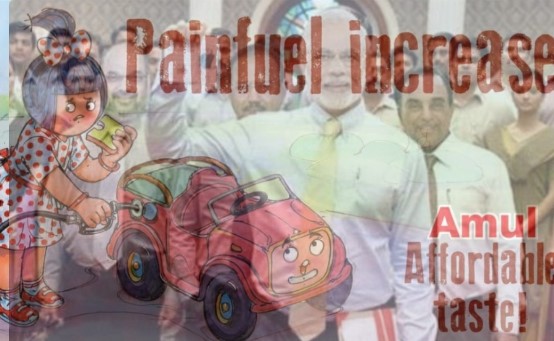 In Amul’s latest advertisement, the girl is trying to fill her car at a petrol pump with a sad face. The caption read, “Painfuel increase. Amul affordable taste.”

No sooner did Amul share its latest marketing campaign on Twitter, netizens began to applaud the brand for throwing its weight behind what has become a huge cause of concern for ordinary citizens of India. Others also warned Amul that it should soon expect CBI raids or other punitive measures for its decision to embarrass the central government.

I request @narendramodi 56 inches and @AmitShah of Judge Loya fame to kindly not arrest this little Amul Girl under sedition charges ? https://t.co/2mIb9sTL8u

Amul has had to face [plenty of criticism in the past for its decision to sponsor Sudarshan TV, which is known for broadcasting Islamophobic content. This had prompted many to boycott the popular dairy brand in the past.